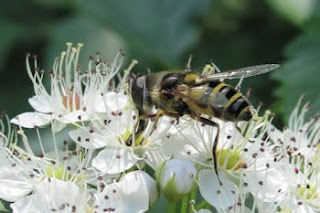 Several bee mimics have been spotted the past couple of weeks in the yard. They have all evolved to mimic the black and yellow coloring of bees or wasps.

The coloring of these harmless mimics sets off warning signals to birds that they're dangerous (stinging) and unpalatable. 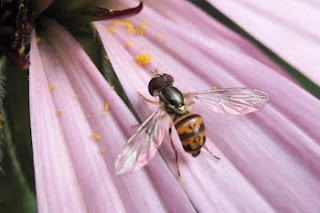 These first two photos are of Syrphid Flies, which are common nectaring flies on flowers.

Flies are the most common bee mimics but there are a few black and yellow colored beetles as well as Clearwing Moth species that look like bumble bees. 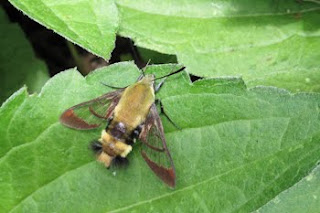 This Snowberry Clearwing Moth (Hemaris diffinis) perched for me just long enough to get a photo. Clearwing moths are day flying moths, and fly and nectar similar to a hummingbird hovering above or beside the flower. It's an amazing sight to see them nectaring. 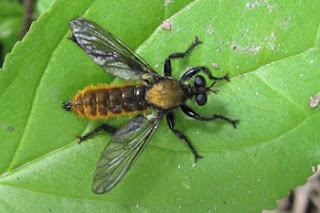 The last bee mimic sighted in the yard was a first for us - a Robber Fly (Laphria sericea). This hairy fly was not hard to identify as a fly with its two wings (bees have four), but to a bird above - I think they would think twice before considering having it for lunch.
© Heather Holm, 2015. Heather Holm