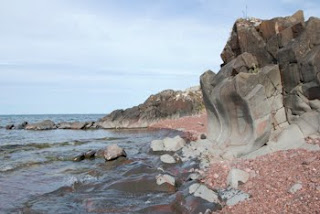 I have grouped these three plants together because they were growing in rock crevices alongside each other. We found them while hiking on the tip of the Keweenaw Penninsula (Lake Superior, Upper Michigan). This was a wind swept site with glacier scraped rocks. This area also gets legendary snow loads. 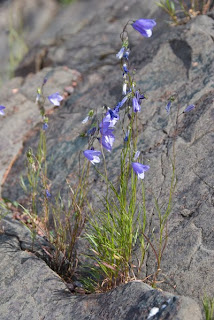 Harebell was thriving in the small openings in the rocks. It seemed in its element in these tight spaces with little soil.

Harebell is a really nice native growing not much more than 12 inches in height, flowering in early summer with bright blue cup like flowers. This photo was taken on July 1st in Upper Michigan.

We have Harebell growing in our yard by our rock retaining wall in similar crevices. 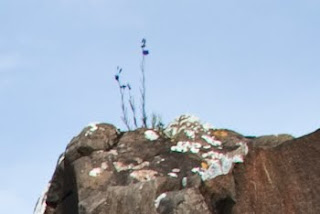 This photo is a close up of the first photo above of the shoreline, and if you look closely you will see the harebell sticking up out of the top of the rock. 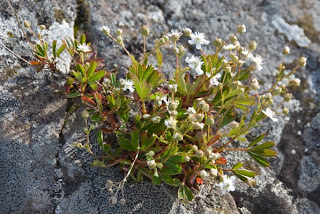 Three Toothed Cinquefoil ~
Sibbaldiopsis tridentata (Potentilla tridentata)
This a really attractive native plant and I have only seen it growing in Upper Michigan here and at Porcupine Mountains State Park. It is listed as endangered in several states. More information. 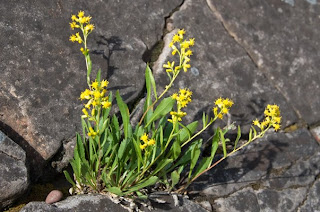 
Another plant growing here was Ontario Goldenrod with its bright yellow flowers and shiny green leaves. It is only native to Ontario and lower and upper Michigan.