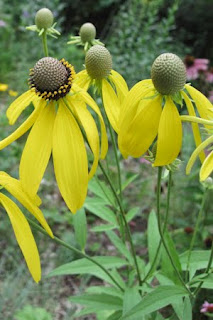 As the common name suggests, this prairie plant resembles a coneflower (Echinacea species) in appearance with the conelike center and downward hanging petals. It is a great plant for any sunny location with medium to dry soil. It can reach about 5 feet in height and makes a nice companion to any prairie grass like Little Bluestem. 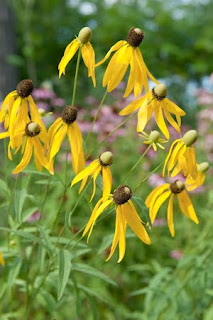 The cones are gray when the petals emerge, then as the plant flowers upwards on the cone, the cone turns brown. It is sought out by many types of bees and wasps, the bees like to make several circles around the cone collecting the pollen. It also attracts many butterfly species. Later in the season gold finches will peck at the cones for seed.

This plant seems to be a good survivor in areas that were formerly prairies. I have seen it growing throughout much of west central and southern Minnesota along roadsides and the edges of farmland. It is quite noticeable even at highway speeds because of its height and bright yellow flower color. 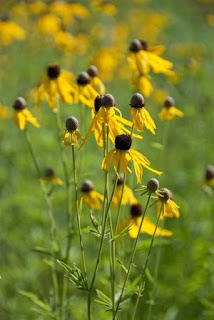 Another species in this Genus is the Long Headed Coneflower (Ratibida columnifera) which has a much longer cone and is shorter in height.

A large patch of Gray Headed Coneflower in a prairie is a wonderful site to see with the petals waving in the wind.
© Heather Holm, 2015. Heather Holm