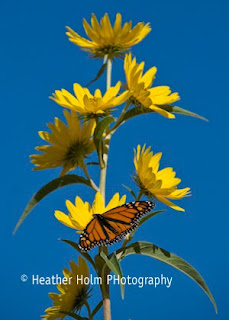 Maximilian Sunflower is flowering earlier than usual in our yard this year (along with many other species). It is a tall 4 - 8 foot perennial forb with bright yellow flowers arranged on short alternating stems arising from the leaf axils.

Its usual flowering time in Minnesota is September through October. I have seen it flowering into late October producing seeds into early winter that are sought out by birds, especially goldfinches and chickadees.

It also provides a nice amount of nectar for butterflies who are preparing for their southerly migration. 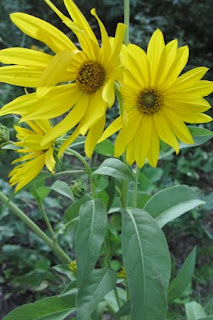 It is native throughout much of North American except for the Canadian maritime provinces and northern territories. It prefers a medium to heavy soil that is moderately moist.

It is palatable and readily eaten by all classes of livestock but decreases in vigor in heavily grazed ranges.(Native Grasses Legumes and Forbs, Phillips Petroleum Company, 1961)

In Gray's Synoptical Flora of North America (1895), Asa Gray writes that is was common in the southern half of Minnesota reaching eastward to Minneapolis where it was plentiful. Also abundant in the Red River valley extending northwest to the Saskatchewan river. Link to Source