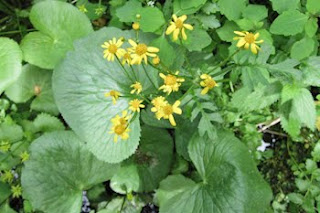 The basal leaves are round to heart shaped but the leaves on the flower stalk are pinnately lobed. 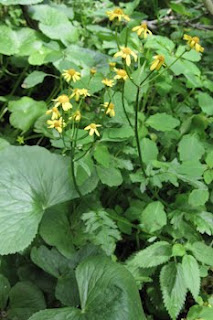 It was growing in several inches of water next to a spring as well as down a whole hillside where there were spring seeps. The bright yellow daisy like flowers were spectacular in a mass down the slope.

Plants growing in association with this Ragwort were Spotted Touch Me Not, Cow Parsnip and a Bittercress species (Cardamine) yet to be identified.

Golden ragwort is native to Eastern North American from Saskatchewan to Texas south and eastwards.