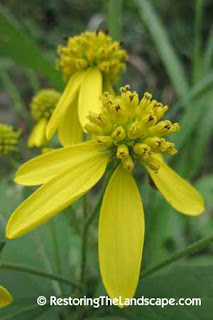 
Another local park discovery while walking the dog, but a first for me in sighting this plant in Minnesota.

This is a 3 to 6 foot native forb with bright yellow downward drooping petals. The ray florets in the center of the flower stick up giving it somewhat of a coneflower appearance.

The former Genus name Actinomeris in Greek refers to the irregularily of the size of the ray florets. (Source) The plant is very showy with numerous flowers on the branching stems. 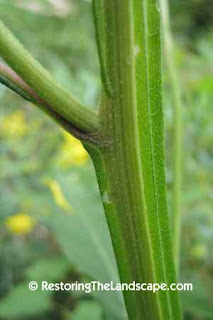 This particular grouping of Wingstem was growing along the edge of a wetland in moist, rich soil.

Wingstem gets its common name from the wings or flares on the stem (somewhat like that of Helenium or Euonymus species).

I almost walked by this plant thinking it was Rudbeckia laciniata (Wild Golden Glow) which is common in our area along wetland edges but the spikey florets caught me eye. 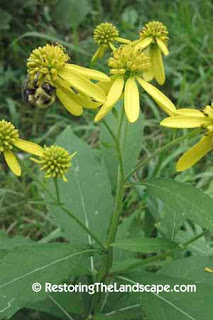 As it turns out, it is not listed in Minnesota in the USDA Plants Database distribution maps. It is in Wisconsin eastwards so we're on the northwestern fringe of its native range.

There were several bumble bees nectaring on the flowers and I'm sure it is a valuable late season nectar source for many insects.