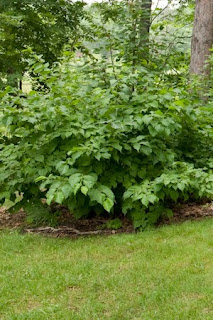 American Hazelnut has been a great native shrub addition to our back yard. It seems to thrive in our dry gravelly soil and has never shown signs of stress during summer droughts.

We have planted several in potted form which we purchased from Outack Nursery as well as bareroot. It is a fairly fast growing shrub with attractive dark green serrated leaves that turn a nice orange in the fall. It's considered a colonizer as it sends out new shoots to form thickets.

We planted several about 4 years ago in the back yard in part shade where we were reintroducing a shrub and understory layer to our mature trees (instead of lawn). A couple of years later, we found two Hazelnuts growing on the back slope in the yard. We were very pleased with this discovery because previous to this we had only seen a few in our local park a mile away. 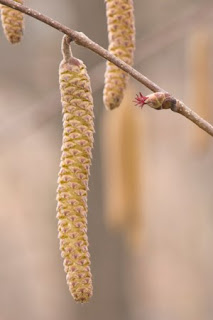 Hazelnut is one of the first things to flower in the early spring. In early to mid April before the leaves have emerged, the male flowers (catkins) start to elongate on the stem and turn a bright yellow as the pollen matures.

You have to look a little more closely for the female flower which is also attached to the woody stem in a scale like bud. The stigma and styles are a bright red and start to protrude to catch the wind borne pollen from the end of the scaled bud. 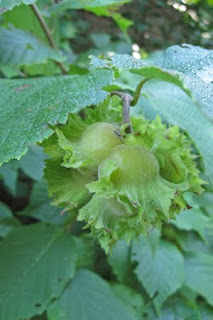 There is another native species of Hazelnut called Beaked Hazelnut (Corylus cornuta) that is also found in Minnesota that has elongated bracts that envelop the nut compared to the short bracts on the American Hazelnut.

The pollinated female flower then develops into the cluster of nuts (filberts or hazelnuts) which begin to become noticeable in late July and early August. 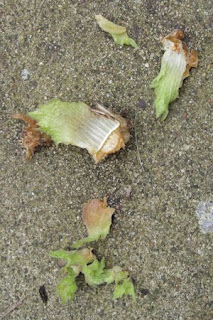 These nuts turn brown when mature and are edible and have a "higher nutritional value than acorns or beechnuts, also are eaten by squirrels, foxes, deer, northern bobwhite, ruffed grouse, turkey, woodpeckers, pheasants, and deer." (USDA Plant Guide)

We rarely get a chance to harvest the nuts for ourselves, the squirrels are already collecting them right now before they have fully matured in our yard.

Here's the remains of the outer bracts that surround the nuts on our walkway. Somebody had a tasty breakfast this morning.

American Hazelnut is native from Manitoba south to Oklahoma and eastwards. It grows in full sun and part shade in open areas as well as low lying wet areas. In other words, it is a really adaptable native shrub that makes a great addition to any landscape.
© Heather Holm, 2015. Heather Holm