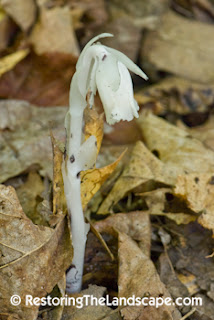 This amazing fall flowering native is white because it lacks chlorophyll. It is heterotrophic  (getting its nutrients from another source, the root parasitic fungi (instead of through photosynthesis). These parasitic (mycorrhizal fungi) are connected to the nearby photosynthetic trees, "and thus the energy ultimately comes from photosynthesis of the tree(s), passing through the mycorrhizal fungi on the way to the Monotropa." (Tom Volk, UW LaCrosse) 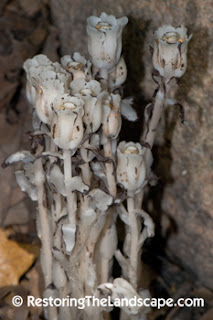 I have only seen this native on east facing, mesic to moist, shaded wooded slopes in Minnesota. It emerges in early to late September just before the new layer of leaf litter falls.

When in fruit, the flower heads turn upwards, looking like white waxy tulips. As the plant ages, the margins of the scale like leaves and stem start to turn brown in color.

Looking down at the top of the flower there are large bright yellow anthers. 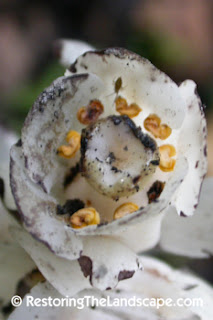 Indian Pipe is between 4 and 8 inches in height.  It is easy to overlook in dark shaded woodlands and I often have to slow down to look for it in the places I know it should be.

Indian Pipe is native to most of North American except for the "4 corners" southwest States.