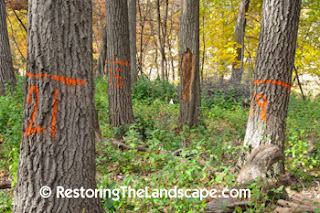 Oak Wilt, a fungal disease, is very common in central Minnesota and it is killing many of our beautiful oak trees - mainly the red and pin oaks.

Our tiny 5 acre City Park in the neighborhood lost several red and pin oaks this summer. 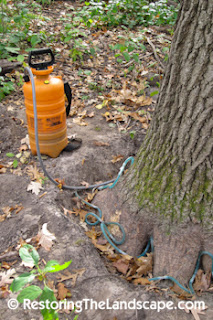 The City has marked and numbered them for removal. The death of these oaks has left a very large opening in the forest canopy.

Fortunately, for this disease, the surrounding oak trees can be treated with a systemic pesticide, propiconazole, to prevent infection. The City did a late fall treatment. "Most new infections are the result of the fungus moving from infected to healthy oaks via grafted root systems, which are common. Trees as much as 50 feet apart may be grafted together. Root grafts may occur occasionally between different species of oaks." (University of Minnesota Extension Fact Sheet) 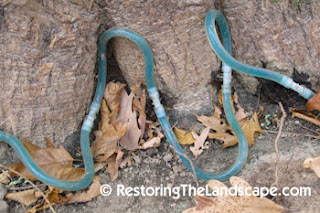 After the injection treatment, the City also did some trenching to sever the root system grafts between the diseased and healthy trees.

White and bur oaks are also affected by this disease but are less susceptible and will have a slower die back. 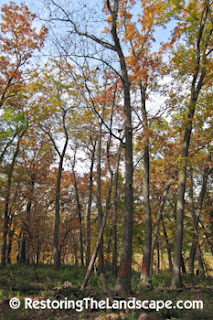 Last spring, we treated a large pin oak on the north side of our house because our neighbor has lost 4 oaks in the last two years. We have red and pin oaks on the south side of the house, but the consulting arborist said that our house foundation would prevent any of these trees having connected root systems. This disease can also be spread by beetles carrying the fungal spores from tree to tree.

"Sap beetles are commonly attracted to the sporulating mats produced by the fungus between the bark and wood of oak wilt-killed trees. These mats are commonly produced between April and late June on red oaks that wilted during the previous summer." (University of Minnesota Extension Fact Sheet)

It is this reason that our City advises its residents not to prune any healthy oak trees from March through November to prevent new infections.