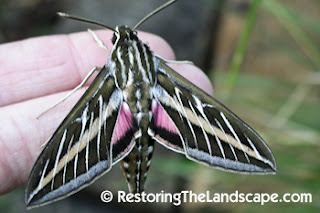 Habitat & Lifecycle
This moth does not overwinter in its northern range (in Minnesota), adults actually migrate north from the south. In Minnesota, there's only one generation per year. (Moths & Caterpillars of the North Woods)
Most often found in fields, deserts and rangelands. (Caterpillars of Eastern North America)

White Lined Sphinx moths occasionally nectar in the afternoon, but more often you will see them at dusk and into the night. (Moths & Caterpillars of the North Woods)

The caterpillar is brightly colored in black, yellow and green, with this combination of colors in varying degrees.

MAJOR NATIVE FOODPLANTS FOR THE WHITE LINED SPHINX MOTH
This moth is less of a specialist than the other moths I have already highlighted. But in its northern range (Minnesota) caterpillars favor Oenothera species, specifically Evening Primrose. (Moths & Caterpillars of the North Woods) 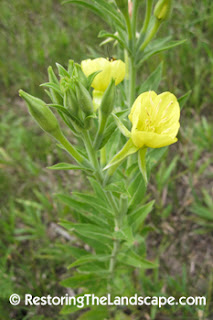 The large four petaled yellow flowers emerge in mid to late July in Minnesota and can continue flowering into early September. This plant can behave as both a biennial and perennial.