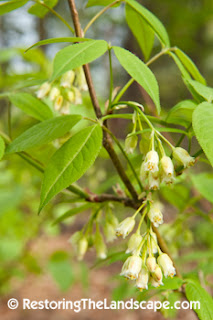 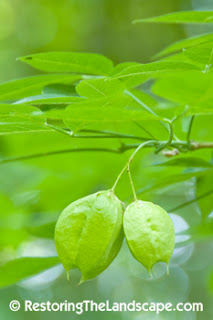 I just found a small cluster of American Bladdernut growing locally in a park. This portion of the park is an island in a creek/wetland habitat and is only accessible in the winter months. The bladdernut is growing on an upland north facing slope in the understory of large oaks and ironwoods.

The seeds pods are the reason why this shrub is called Bladdernut because they look like an inflated papery lantern or bladder. These bladder like pods start to develop by mid June and dry out and brown as the summer progresses. "...the 1-4 pale brown, shiny seeds eventually become loose and rattle within the bladder..." (Trees and Shrubs of Minnesota) 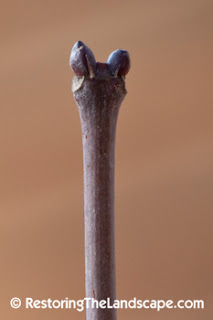 Also according to Welby Smith author of Trees and Shrubs of Minnesota, the function of the bladder is unknown, but "presumably plays a role in the dispersal of seeds".

Perhaps the bladders float well and helps in dispersing seeds a good distance?

Bladdernut is opposite branching with a double terminal bud. 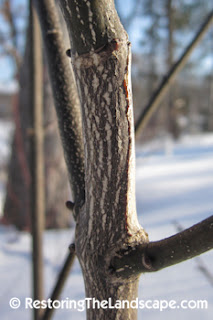 The bark is smooth and gray brown in color on new growth but on the older growth it develops into a dark chocolate brown with white streaks.

American Bladdernut is native to eastern America and southern Ontario. From the southern third of Minnesota southwards to Louisiana and east.

The best location for this shrub in the home landscape is in a shade to part shade location in medium to moist soil.