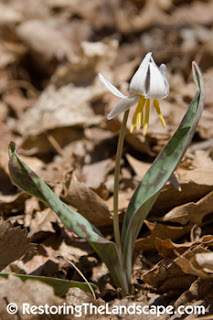 We are fortunate enough to have three species of Trout Lily (Erythronium) native to Minnesota, one is endemic to the State and listed as endangered.

Trout Lilies, also called Dog-Tooth Violets or Adder's Tongues are a spring flowering woodland native. These ephemerals flower from early April through May in rich woods before the tree canopy leaves open. 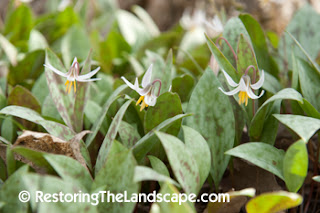 The most common is the White Trout Lily ~ Erythronium albidum which is found in the southeastern part of the State and north along the three major river corridors.

Its flowers have 6 white petals and bright yellow anthers that hang downwards. Emerging bees will nectar on these flowers. 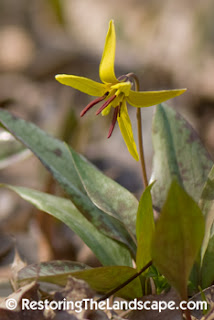 The Yellow Trout Lily ~ Erythronium americanum is less common in Minnesota, only found along the eastern edge. It is native to much of eastern North America. I have seen large patches of this Trout Lily growing in rich woods in the Great Lakes region.

The yellow flowers are 6 petaled as well with red anthers. These flowers are about the same size as the White Trout Lily, around 3/4 inch in diameter. 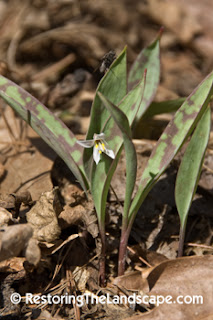 The last one is Dwarf Trout Lily ~ Erythronium propullans, the most rare and listed as federally endangered. It only grows in a few southeastern counties in Minnesota.

This Trout Lily is much smaller in size than the other two and can have anywhere from 4-6 petals. The one pictured here has four petals. The flowers are much smaller too, less than 1/2 an inch in diameter and are a whitish-pink in color. Note the size of the fly on the leaf above the flower. 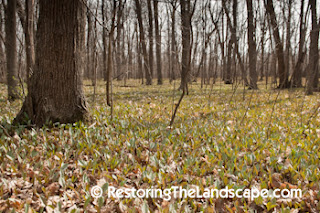 If you want to see the White and Dwarf Trout Lily, visit Nerstrand Woods State Park in late April.