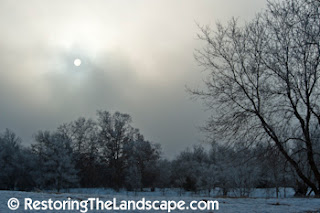 Today we awoke to a beautiful hoarfrost on the trees. All the lakes are still frozen in our area, but some smaller creeks and rivers have open water. 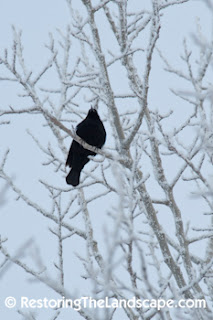 Right on schedule the male Red Winged Blackbirds have returned. A flock flew overhead last night and this morning at our local park, one lonely male was calling out over the frozen wetland in a hoarfrosted poplar.

It finally feels like spring has arrived here in Minnesota with our seventh snowiest winter on record we have at least another week and half for all the snow to melt.

The Red Wing Blackbirds will come to our feeders in early spring from the wetland behind our house looking for extra nourishment until the insects emerge and the water opens up. 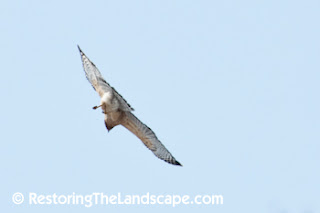 The Cooper's Hawks have returned too, within a day of last year's records. Three were cruising the skies above our house this morning, calling out to each other. A few crows flew alongside and harassed them. 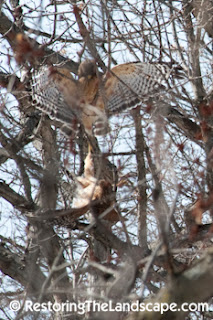 One Hawk suddenly dove after another over our neighbor's yard. They became entwined and tumbled from the air falling into the trees. The hawk above is resting on a branch with its wings outstretched and hanging by one talon is the other hawk below.

They stayed like this for several minutes, the hawk below struggling to get away. There was a crashing sound through the branches and the top one flew away followed by the one below.

I don't know if these were two males fighting over a third female or perhaps for nesting territory. There's never a dull moment this time of year.
© Heather Holm, 2015. Heather Holm