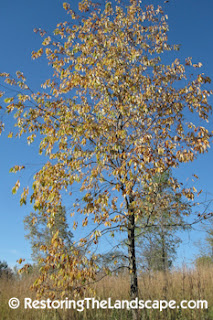 
Black Cherry trees are beautiful medium sized native trees. Highly valued for its wood for use in carpentry and also by wildlife.

Squirrels, raccoons and many bird species will eat the clusters of dark blue drupes when ripe. We have several fairly large black cherry trees in our yard, the ones in the lowest lying area with the richest soil are over 2 feet in diameter. 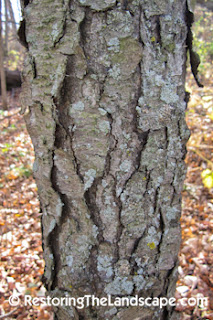 When mature it's easy to distinguish Black Cherries from other trees. The dark gray bark has peeling plates that make it fairly unique.

Black Cherry trees flower in late May - early June in our area with 5 parted white flowers that are clustered in a raceme. The fruit develops over the summer turning from bright red to a mature dark blue in color. 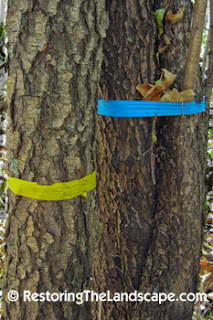 Flocks of Waxwings and Robins will devour the fruit in the trees in our yard, thus dispersing the seed. Since we have naturalized much of our yard and left the leaf litter, we have had several Black Cherry seedlings emerge.

If you do mistakenly cut down a Black Cherry, they will resprout and sucker several new leaders. 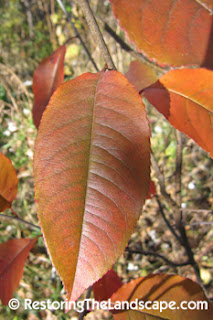 Black Cherries are more common in open areas or on the edges of woodlands. They are fairly shade intolerant and will not thrive under a mature canopy.

They turn a beautiful fall color, starting with golden yellow, sometimes turning a pinkish shade before finishing with an orange-red hue. The leaves are fairly glossy and narrower in shape than Choke Cherry leaves.

Black Cherry trees are native to eastern North America from Ontario south to Texas and eastwards. A few western States and Provinces  are included in its range too - New Mexico, Arizona and British Columbia.