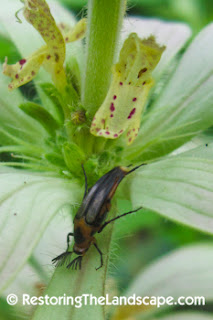 Another new insect discovery in our yard, and this beetle is one devious insect. I thought this was perhaps a type of flower beetle but as it turns out it's a Wedge Shaped Beetle.

This photo is of a male hanging out on my Spotted Beebalm (Monarda punctata) which just started to flower. The lifecycle of these beetles is fascinating. 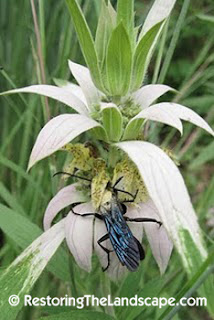 Both the male and female are found hanging out on flowers, where the female lays her eggs. "Eggs hatch into an active larva that attaches itself to a visiting wasp. It is carried back to the wasp nest where it burrows into a wasp larva and lives as an internal parasite." (BugGuide.net) 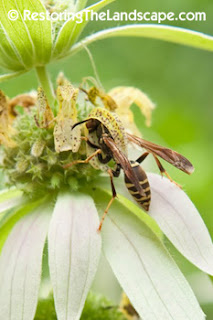 "Instead of eating both the bee's egg and the pollen stored in the nest, the wedge-shaped beetle larva waits for the host's egg to hatch, then burrows into the bee or wasp larva. It consumes the larva from the inside for a while, then rips its way out of its still-living host, wraps itself around the poor host's neck like a spiny collar, and proceeds to eat away at its victim from the outside, eventually killing it." (Insects Their Natural History and Diversity)

The larvae target many types of wasps and bees including Vespids, Bumble Bees, Thread-Waisted wasps and Spider Wasps. (BugGuide.net)

It's no surprise that this beetle chose the Spotted Beebalm which is a favorite of many types of wasps in our yard, including the Great Black Wasp (middle photo) and Northern Paper (bottom photo) wasps.