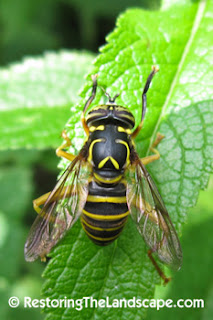 
I am amazed at the number of insect mimics I've seen this year in the yard. It's hard to keep track of which one is mimicking another and why.

This Syrphid Fly first appeared last year when our Stiff Goldenrod was flowering. I was able to photograph one again just last week. 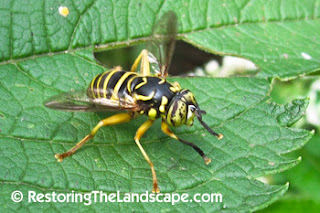 It was perched on some Boneset leaves and was waving its forelegs much like the Stilt Legged Fly does. I assume this mimics the longer antennae of wasps. So not only is this fly colored like a black and yellow wasp, it is also trying to mimic behaviors of wasps. 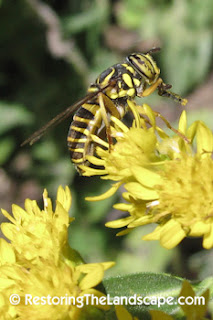 These flies like to nectar on late summer flowers in our yard, I have seen them on Goldenrods as well as Asters. The markings on the face are intriguing with the large eyes spotted with yellow.