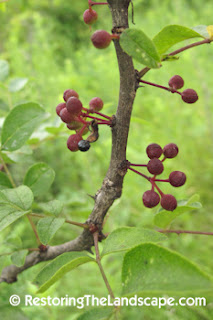 
The Prickly Ash fruit is all but gone this time of year, but in early July as the red capsules are forming, you can smell the orange/citrus odor coming from the berries as you walk by. Crush a capsule between your fingers to get a sense of how strong orange aroma is. 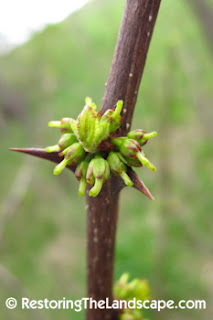 The red stalked capsules will turn dark red to brown as they mature and are sought out by many types of wildlife including "bobwhite quails, vireos, pheasants, cottontails, and eastern chipmunks. Bees are attracted to the flowers. Giant swallowtail butterflies lay their eggs on the plants leaves." (USDA Plant Guide) 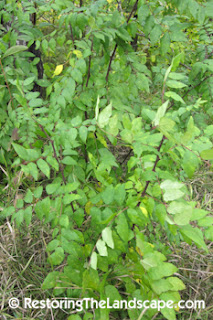 Prickly Ash is considered a large shrub or small tree. It can reach heights of 25 feet, more commonly a large specimen in our area is 12-15 feet. It has a suckering habit, often colonizing an area after a disturbance as well as in drier, poorer soils. The yellow-green flowers open along the stems in early May, before the leaves emerge.

Prickly Ash has triangular shaped thorns that occur along the stem. This along with the suckering habit often deters people from planting it in their landscape. But if you have poor soils and a large area that would make a good bird thicket, it is a good candidate for that. The tender new shoots are browsed by rabbits so it's recommended that you protect young plants during the winter months. 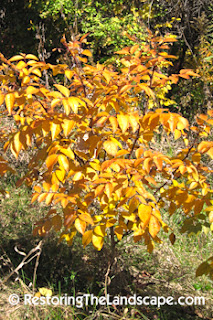 The leaves are compound with 5 - 11 leaflets. In late September to early October Prickly Ash turns a beautiful bright orange.

Tolerant of part shade to full sun, you will find Prickly Ash growing in open dry sites, along woodland edges as well as in disturbed sites.

Prickly Ash in native to eastern North America. See map below for range.