Is That Species Native?

Guest Post by Michael Lynch
The question of whether something is native or not comes up a lot. Leave aside the question of how do you know what a given plant is, how do you decide if it grew here before European intervention. Often the label will say "Native" somewhere, but native to where. if a given species is native to North America, does that make it native to Minnesota?  I will use a few examples to illustrate the confusion.

I will be using a set of maps aquired from the Biota of North America program. For more information on these maps and how to interperate them you can see my prior post here. 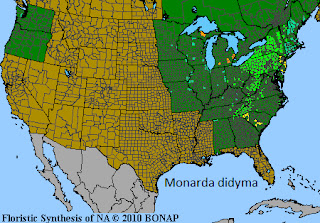 Bee Balm
There is obvious confusion with this plant with it's numerous hybrids and cultivars. Two species are important in horticuluture. Monarda didyma and Monarda fistulosa.  Monarda didyma is a tall plant with bright red flowers and it grows well in shade and rapidly spreads to fill an area. It is promoted as a native and is very attractive to pollinators. What's more, it is easy to grow here. The question is, is it native to Minnesota? Not really.

M. didyma is native to the eastern US and the Appalachian Mountains. The closest its native range comes to Minnesota is Ohio or eastern Tennessee.  Look at the other species of Bee Balm. 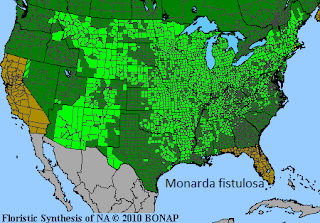 Monarda fistulosa is a medium height plant with pale pink flowers that grows in full sun and does not spread by runners. It is also called native and is also very attractive to wildlife and pollinators. Is it native?

From this map Monarda fistulosa is widespread in most of the state of Minnesota.

What about a more suprising group of plants that the purist in me did not expect. 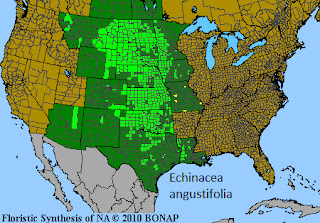 There are three major species of Echinaceas in the US. E. angustifola, E. pallida and E. purpurea. I believed that at least one of them was native to where I live in Minneapolis, Minnesota. When you look at the map, you realize that's not true.

E. angustifolia is native to Minnesota, but it doesn't extend to the eastern two thirds of the state. It is a true Great Plains species and doesn't grow in our oak savannas or tall grass prairies. 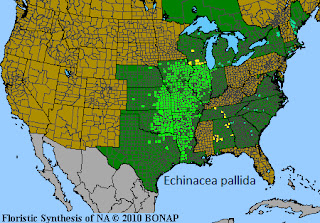 E. pallida is not native to Minnesota at all, but it comes very close. It is native to the tall grass prairies just south of Minnesota. 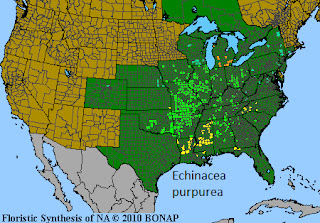 E. purpurea is the most common species used in horticulture and herbally. However, it is not native to Minnesota either. It grows in the tall grass prairies to the south of us, and is scattered in areas east of the Mississippi river.

Obviously, there is nothing wrong with growing a plant even if it is not historically native to your area. Many insects still visit the flowers and birds will happily eat their seeds. But if you are a native plant purist seeking a representation of what your landscape would have looked like before the native plants were extripated, it is important to realize where those plants actually grew and more carefully select the plants you choose to grow in your garden or yard.
© Heather Holm, 2015. Heather Holm