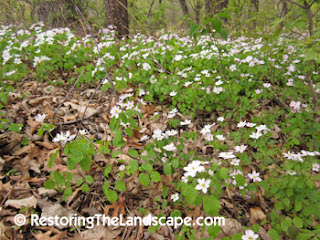 
The Rue Anemone has been really showy this spring in our mesic Minnesota woodlands. A light pink to white flowering perennial native, it reaches about 8 inches in height. 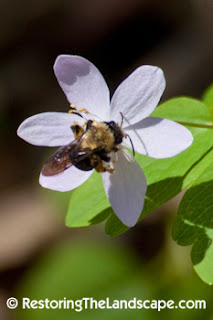 Native bees and flies have been enjoying the flowers including this large Andrena bee, which are often mistaken for bumble bees. 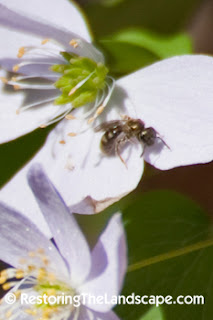 The tiny Sweat Bees (Lasioglossum subgenus dialictus) have also been visiting the Rue Anemone flowers. The larger Mining Bees (Andrena species) bees like to scare them off as they come buzzing in to land on the flowers.

And of course lurking nearby were several Cuckoo Bees (Nomada furicornis species group), taking in the pollinator activity and waiting for an opportunity to slip into one of the pollinator nests to lay their eggs. 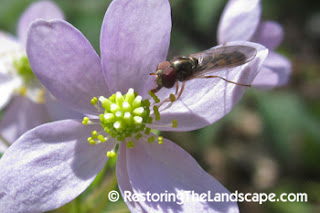 Syrphid flies of many types also stop by for some pollen. Rue Anemone is another spring flowering native that does not provide a nectar reward.

So these visitors make do with eating or collecting the pollen. 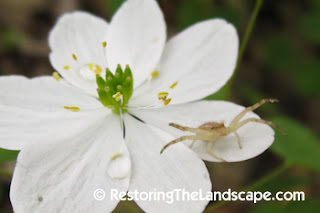 I spotted another pollinator predator, a spider waiting with legs outstretched for its catch on a cool, overcast day. Unfortunately, I think the spider was out of luck as it was much too cool for the pollinators to be visiting any flowers.
© Heather Holm, 2015. Heather Holm