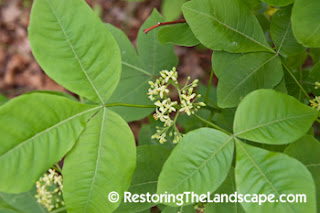 Our small Wafer Ash flowered this year and I was surprised at how fragrant the flowers were. And it's no surprise that the fragrance attracted many types of pollen and nectar seeking insects. 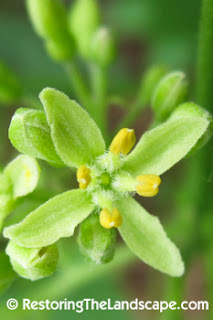 The tiny four or five parted flowers are arranged in loose cluster about two inches in width. 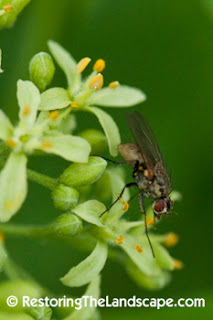 Muscid flies were enjoying the flower offerings, who knew that they have a taste for sweet smelling things too? 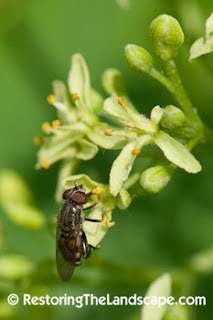 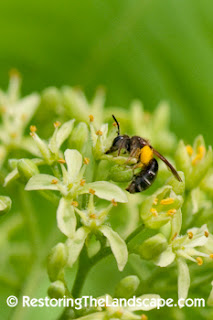 Tiny Sweat Bees (Lasioglossum species) were busy collecting pollen and nectar. It was no surprise that two types of Cuckoo Bees, both cleptoparasites were nectaring on the flowers too. 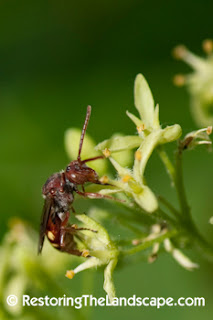 Here a Nomada species with its rusty brown coloration and yellow spots on its back. I featured this Cuckoo Bee in an earlier post this spring titled It's a Bee Eat Bee World.

Cleptoparasitic bees don't fashion their own nests but instead lay their eggs in nests of other ground dwelling bee species. 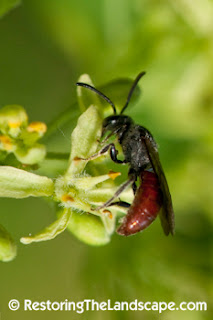 This Sphecodes species was a new sighting for me, very distinctive with its bright red body. It was also enjoying the nectar offered from the Wafer Ash. Neither of these Cuckoo Bees forage for pollen because they're not building their own nests.

What's fascinating about the Sphecodes bee, is that is belongs to the insect Family Halictidae (Sweat Bees) not the cleptoparasitic subfamily of Nomadinae (Cuckoo Bees). 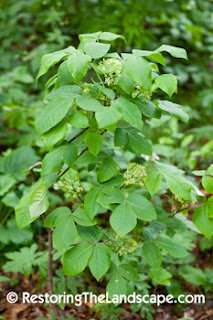 The Sphecodes are parasites of the Sweat Bees, the same family in which they belong. Depending upon their social relationship to the host species, they can be cleptoparasites or just social parasites.

Cleptoparasites - Seek and Destroy
"A female of the solitary Sphecodes enters the nests of other solitary bees to lay an egg while the host female is away foraging. Once in the nest, although most other cleptoparasites do not harm the host's egg, a female Sphecodes destroys the host's egg before laying her own." (Attracting Native Pollinators)

Social Parasites - Coup d'Etat
If they're social parasites, they "enter the nest and in some way replace the queen, so that the host workers then tend and rear Sphecodes offspring." (Attracting Native Pollinators)