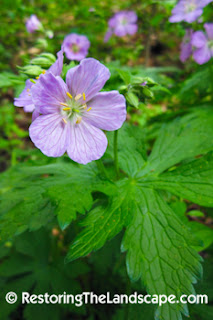 If you are planning a woodland garden, or already have one established, these 12 native plants are definitely worth considering. One of the major components in developing a native woodland garden is to build, and establish a good duff layer of leaves and humus.

If you are just starting out, don't throw your leaves away in the fall, woodland natives need the protection of leaves to help keep their roots cool in summer, and blanketed in winter. 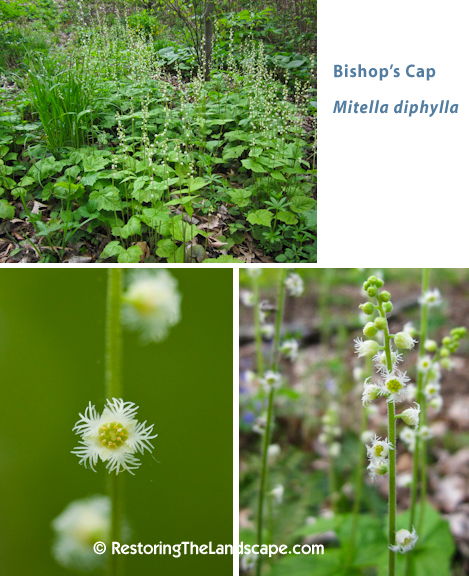 Bishop's Cap has extremely dainty flowers, the petals are fringed and look like snow flakes. This native plant is similar in growth habit to Heuchera species, with a cluster of basal leaves and long narrow flower stalks.

It blooms from May to June and likes sandy-loam to loam soils, dry-mesic to mesic moisture.

It spreads by rhizomes forming a nice mass once established. Combine with woodland phlox or large flowered bellwort. 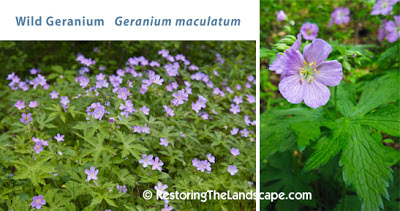 Wild Geranium is one of my favorites, flowering from April to June, the large pink to purple flowers are extremely showy and abundant. It has a mounding habit with attractive palmately-divided leaves that turn bright red in the fall. Combine with false solomon's seal, and woodland phlox. It can get up to three feet tall in rich soils, so don't plant next to tiny ephemerals that can get overpowered by wild geranium. 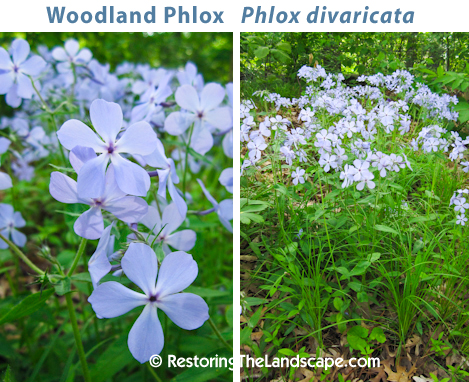 Woodland phlox flowers can be a soft blue, pink or white. The large, five-parted flowers are showy and held above attractive foliage. Woodland phlox can be browsed by herbivores. It flowers from April to June. Utilize woodland phlox inter planted with other smaller-statured natives such as downy yellow violets or large flowered bellwort. 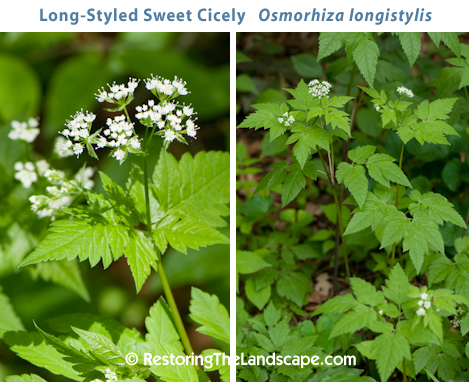 The white umbel flowerheads of long-styled sweet cicely brighten any shaded woodland garden. Stems are dark maroon in color with fern-like compound leaves. Flowers from May to June, combine with Wild Geranium. 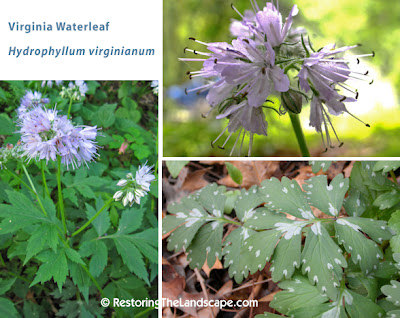 Virginia waterleaf is extremely easy to grow, it readily reseeds once you have some established plants. The young leaves are speckled with silver to white spots. Pink to purple flowers arranged in cyme bloom from late April to June. Virginia waterleaf can reach heights of 24", but more typically the flowerheads top out at 12-16". Combine with false solomon's seal and downy yellow violets near the edge of your woodland planting. 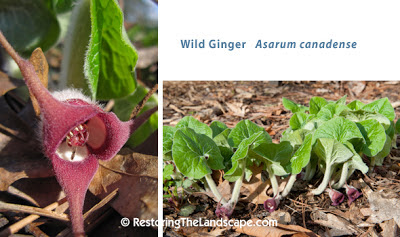 Wild Ginger is a very attractive, low growing native. Often used massed for best effect, the red to maroon flowers develop under the leaves and are not always visible. The foliage however, looks great through the summer months in mesic soils. It spreads by rhizomes and easy to divide. Seeds are dispersed by ants. 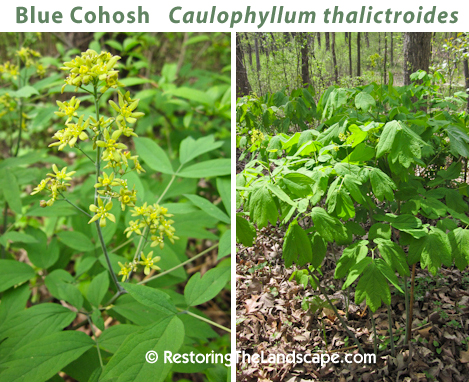 Blue cohosh flowers in early spring from April to May. It is a tall plant, usually reaching heights over 30". The compound foliage has soft, delicate leaflets that set off the panicle of green-yellow flowers. The resulting fruit looks like a cluster of blue berries, but it's actually a hard seed covered by a blue skin. Make sure you have plenty of leaf litter and soils rich in humus. 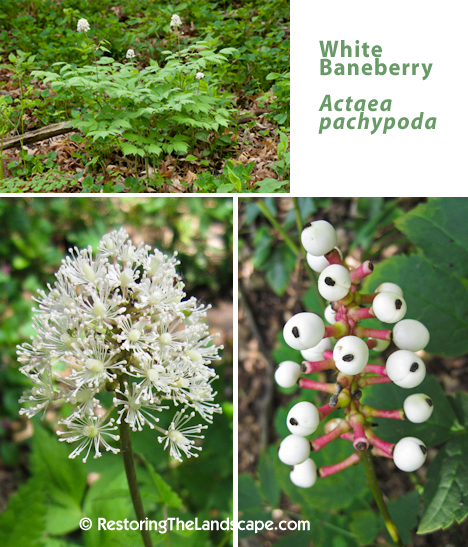 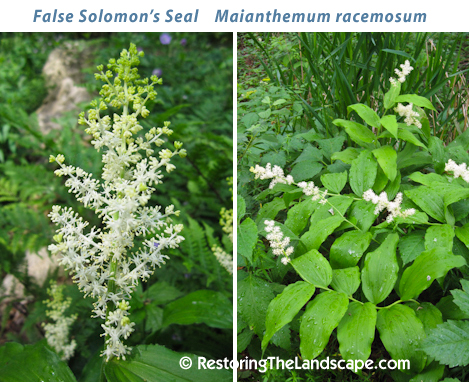 Another woodland plant that is rhizomatous. The large, terminal flowerheads are extremely showy, and the flower stem zigzags slightly as it arches over. It flowers from May to June and is very tolerant of drier woodland soils, great to utilize under trees. 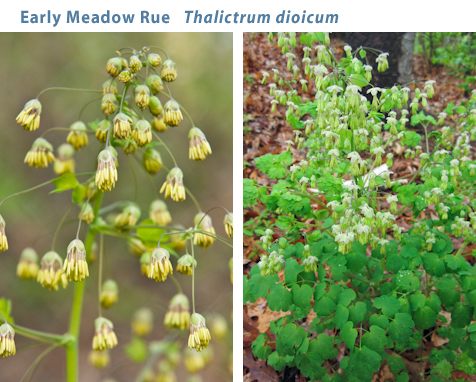 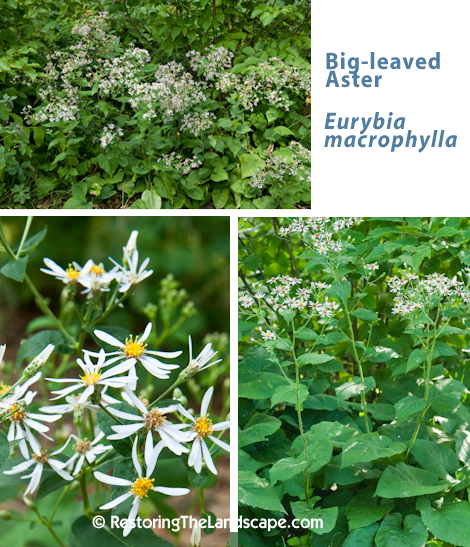 The native plants above all flower in the spring; for some interest in late summer in the woodland garden, try big-leaved aster. It can start flowering in late July and continue into September. As the common name suggests, the leaves are large and slightly heart-shaped. Many white to light blue flowers are arranged in a flat-topped flowerhead (panicle). This native spreads by rhizomes and forms a dense cluster. It performs best in mesic soils. 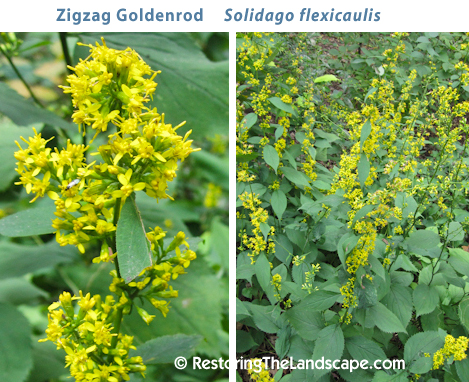 One of the most shade-tolerant goldenrod species, zigzag goldenrod flowers from mid August to October. The bright yellow flowers are a welcome site in the woodland landscape. The leaves are very attractive with serrated edge and pointed tips. The common name is for the zigzagging flower stalk.