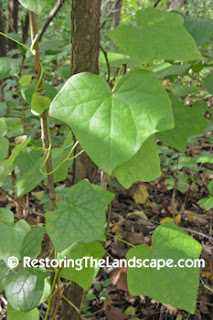 The first time I saw this vine was when we moved to Minnesota. It was growing at a Carver County park in a maple dominated woodland.

This vine is very shade tolerant growing in the understory of mature trees and in partly sunny openings. This vine is twining in habit. Wrapping itself around the trunks of trees. It can grow as tall as 25 feet in height but more often it is much smaller. It will often grow laterally along the forest floor.

Moonseed Vine has separate small white male and female flowers arranged in panicles. It flowers in early summer in Minnesota usually starting in June. The fruit is dark blue round and grape-like in appearance. 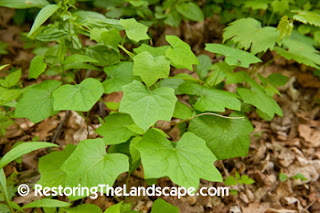 I especially like the leaves which have soft wavy margins and a somewhat maple leaf shape.

I only see this vine west of where I live. There is a distinct geological and ecological line just west of my house. I live in a more open or sparser Oak Woodland Brushland area, but just west is the Minnesota Big Woods with more maples and a denser woodland. Our soils are quite dry here (glacial outwash gravel), but west of our house they become more loamy where this vine seems to thrive.