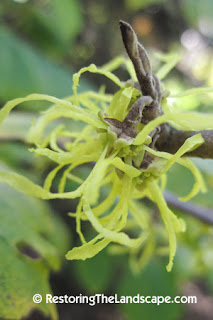 The Witch Hazel just started to flower in our yard last week. I'm always amazed at how late in the year this woody plant flowers. We've already had a frost so there are fewer pollinators available to pollinate the flowers.

Pollination occurs in the fall but the flowers are not actually fertilized until the following spring. The seeds mature the following fall and are ejected from the brown capsules. (Welby Smith, Trees and Shrubs of Minnesota) 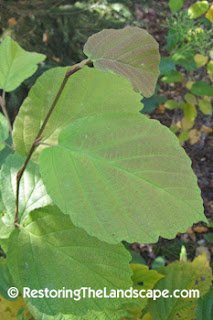 Witch Hazel is a large shrub or small understory tree. It can grow up to around 20 feet in height, usually in a multistemmed form. The leaves are really similar in appearance to American Hazelnut (Corylus americana). They are elliptical in shape with soft wavy edges. The leaves turn a nice yellow to rosy color in the fall. 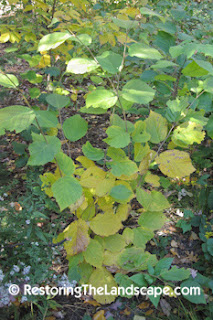 Witch Hazel is uncommon in Minnesota, reported in only four counties, three of which are in the southeastern corner of the State. It is an eastern North American native, growing as an understory plant. Also according to Welby Smith in his book Trees and Shrubs of Minnesota, Witch Hazel is found growing in association with Oak, Sugar Maple and Basswood.

The flowers are fairly inconspicuous because they often open before the leaves have fallen, and hang downwards below the branch from which they're attached. They are four petaled, thin and twisted and a soft yellow in color. 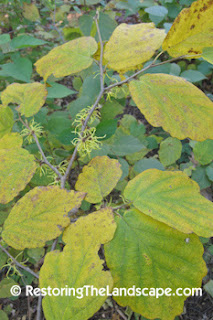 Rabbits will feed heavily on the Witch Hazel stems during the winter. It's a good idea to protect them if you want minimize damage.

Witch Hazel is used extensively for medicinal purposes. "Medicinal extracts, lotions, and salves are prepared from the leaves, twigs, and bark of witch-hazel. The distillate is used to reduce inflammation, stop bleeding, and check secretions of the mucous membranes." (Vines, Robert A. 1960. Trees, shrubs and woody vines of the Southwest, p. 1104)