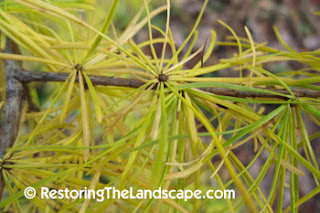 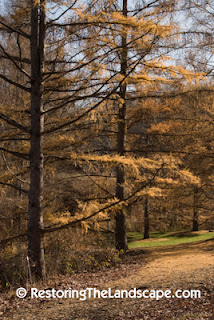 The tamarack needles are turning a beautiful gold color right now. This interesting conifer sheds its needles in late fall and looks all but dead throughout the winter months.

One's brain can trick you into thinking that any conifer without its needles must be dead. But as the new needles emerge in the spring, soft to the touch and blue-gray in color you are reminded that this tree is very much alive.

Tamaracks typically grow in wet habitats although you will see some clusters in upland habitats. When we travel to north-central Wisconsin, Tamaracks (along with Black Spruce and Alder) are very abundant where there is a high water table. 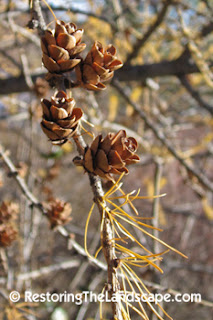 In our metro area in central Minnesota, there are small fragments remaining of the original Tamarack swamps that existed before European settlement.

"Several animals depend on the Tamarack for food including the porcupine, snowshoe hare and red squirrels. Several birds also use the Tamarack to nest in, such as the white-throated sparrow, song sparrow and the great gray owl." (Johnston, W.F., Silvics of North America, Washington D.C., U.S. Government Printing Office, 1990, p. 151) 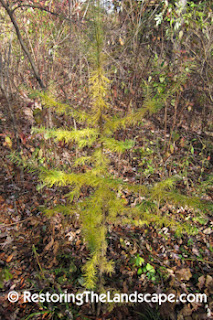 We have one small Tamarack in our yard which was planted at the lowest elevation and moistest spot. The area often gets flooded in the spring as the snow melts and the ground is still frozen underneath. It has not produced any cones yet but has doubled in size in the last three years.
© Heather Holm, 2015. Heather Holm