Interim Measures: Cut back after flowering to prevent seed formation 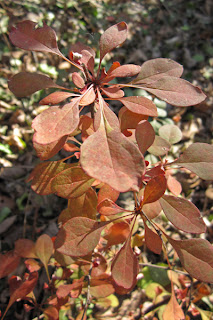 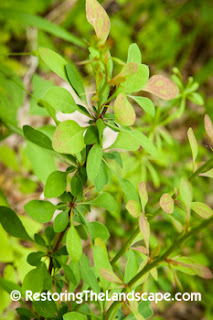 I found this Japanese Barberry plant growing at a Carver County park last spring, and just this week found it growing at an Eden Prairie park in Hennepin County. Both were found in fairly dense shade in woodlands.

I knew that the Wisconsin DNR had this horticultural ornamental listed as invasive but this was the first time I had seen an escapee in Minnesota. In fact, "Japanese barberry has been reported to be invasive in twenty states and the District of Columbia. Due to its ornamental interest, barberry is still widely propagated and sold by nurseries for landscaping purposes in many parts of the U.S." (State of Pennsylvania Fact Sheet)

Japanese Barberry flowers in late May to early June in Minnesota producing creamy yellow-white flowers that dangle below the thorny branch. These flowers produce red berries in late summer to early fall in Minnesota.

"Barberry produces large numbers of seeds which have a high germination rate,  estimated as high as 90%." (State of Pennsylvania Fact Sheet)

The Barberry berries are eaten by birds and thus distributed to new places to germinate.

If you have Japanese Barberry in your landscape, do your part by replacing it with a native shrub or non-invasive exotic ornamental.

You can help stop the sale of Japanese and European Barberry in nurseries. Do not buy this shrub and tell your local nursery that this plant is invasive!