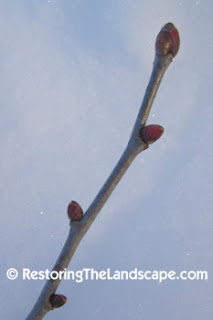 It's hard to miss the large bright red buds of American Basswood this time of year while walking in the woods. This native tree is fairly common in our area in central Minnesota. At the local park, it is one of the dominant trees along a wooded ridge on both the east and especially the west slopes. It grows in the understory of oaks and elms and is fairly shade tolerant. 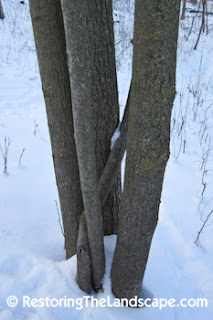 In this same park there a few American Basswood trees that are close to 4 feet in diameter which is pretty large for their mature size.


Most often you will see 1-2 foot diameter trunks, arranged in a cluster with a main trunk and several suckering leaders around the base. 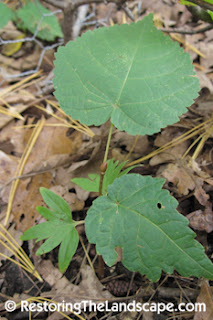 The younger Basswood bark is smooth and light gray, as the tree matures the bark becomes narrowly furrowed. Basswood trees can reach over 100 feet tall in good habitats. These habitats include low lying areas in "alluvial soil in river corridors, especially on slightly elevated portions of floodplains that are just beyond the reach of repeated or long-duration spring flooding and sedimentation." (Trees & Shrubs of Minnesota)

American Basswood have large heart-shaped leaves, with serrated edges. The leaves can get as wide as 5 inches. They have been referred to as 'lumberjack toilet paper' for their convenient size. 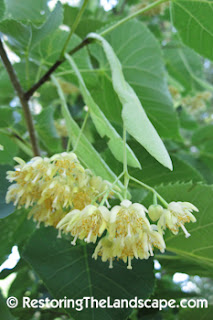 Basswood flowers are extremely fragrant and attract many insects. The five petaled yellowy-white flowers open in our area in early July and hang downwards in a cluster (cyme) from a flat bract.

Basswood flowers in midsummer instead of in the spring like other canopy trees in Minnesota, relying on being pollinated by insects rather than wind. (Trees & Shrubs of Minnesota)

The fruit is a round drupe and is "eaten by birds and small mammals". "The wood decays easily and produces many cavities (especially in trees past 120 years of age) which are used by cavity-nesting animals (wood ducks, pileated woodpeckers, other birds, and small mammals)". (USDA Plants Database Plantguide)

In the book The Forager's Harvest, the author Samuel Thayer writes that young unfurling Basswood leaves make one of the best salad greens.

American Basswood is native to eastern North America, from Saskatchewan south to Texas and eastwards. There are three subspecies, americana, caroliniana and heterophylla.
For distribution maps of these subspecies, see the USDA Plants Database website.