White Striped Black Moth ~ Trichodezia albovitatta
This tiny (1 inch wide) black and white moth is also a day flying moth. I have only seen this moth a couple of times, the most recent was in our yard this summer in late June. 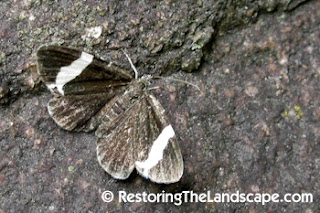 The light green caterpillar has a distinctive black stripe across the face and down the thorax. (BugGuide.net)

MAJOR NATIVE FOODPLANTS FOR THE WHITE STRIPED BLACK MOTH
The three major foodplants for this moth are Impatiens, Thalictrum and Epilobium species. 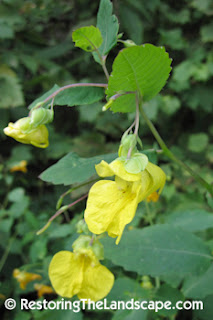 Impatiens species
Impatiens pallida ~ Yellow Jewelweed (Touch Me Not)
This is a common annual native along wetland margins and riparian edges. These two Impatiens species like wet soils in a variety of exposures from full sun to shade.

The Yellow Jewelweed flowers later in the summer starting in July. A large stand of Jewelweed is a great place to watch for multiple hummingbirds nectaring, and also buzzing each other protecting territories. 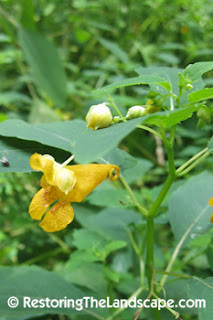 The Spotted Jewelweed flowers earlier in the summer starting in June. Jewelweeds produce seed pods that when touched will break open and shoot their seeds a large distance.

For this reason, once you have Jewelweed in your yard, it will almost always reseed and return the following season. It can be aggressive in moist soils but it is easy to pull out with its shallow roots so you can maintain a desired hostplant patch. 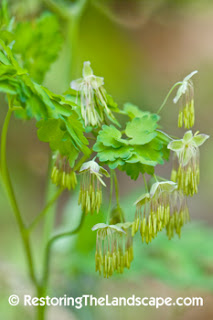 This woodland native is common in mesic to dry shade. It flowers early (late April, early May in Minnesota) from stalks anywhere from 1 to 2 feet tall. The dangling male stamens flutter in the wind giving the flower a unique appearance.

The leaf margins are soft and wavy and a nice feature when it's not in flower. 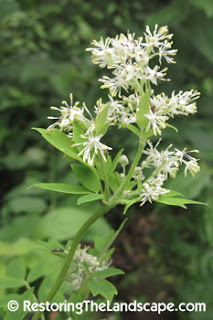 This native is common in wet to mesic habitats along wetlands and in ditches in full to part sun. It flowers later than the Early Meadow Rue, June through early July in Minnesota.

As the common name suggests, it is very tall reaching 3 to 5 feet in height. 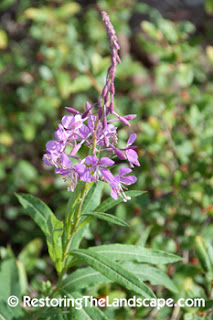 I most often see this native growing in moist ditches along roadsides in full to partial sun. It is one of the first plants to establish after a burn thus its common name.

The 4 parted medium pink flowers open from the bottom upwards on the raceme. It flowers from late June through August.

Fireweed can reach heights anywhere from 2 to 6 feet. It can spread aggressively through its rhizomes.
© Heather Holm, 2015. Heather Holm