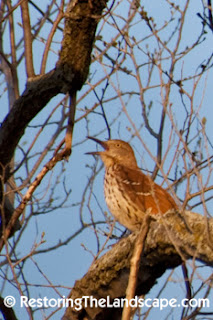 
We've had a Brown Thrasher return to our local park each spring for the last three or four years. This Thrasher perches on a tree, in a brushy/grassy area overlooking the restored prairie. We usually see it in the early mornings or late evenings as it sings its heart out.

We had a pair of Brown Thrashers visit our yard for the first time in the pouring rain last weekend which was really exciting. 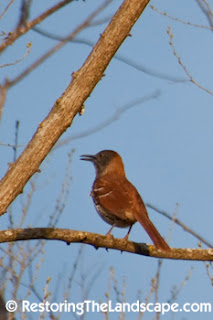 Brown Thrashers are fairly large birds (about the same size as a Blue Jay), with bright rusty red coloring on their backs and black striping down their white chests.

Brown Thrashers have one of the most diverse set of vocalizations. "Song of rich, musical phrases, each repeated two or three times with pause between each set; no other species has such clearly paired rhythm". (Sibley Guide to Birds)

Brown Thrashers are year-round residents in the southeastern most States, they migrate north for the summer to our area in Minnesota, and even up as far north as central Saskatchewan.

Here's a video (for listening) of the Brown Thrasher going through its repertoire of songs.


You can read more about the Brown Thrasher here