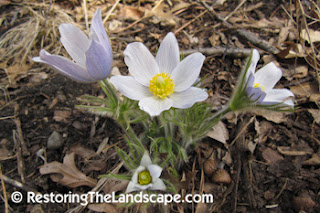 
Pasque Flower can bloom very early, in some years in early April. It's attractive 1-2 inch wide blooms can be a pale white to lavender in color. 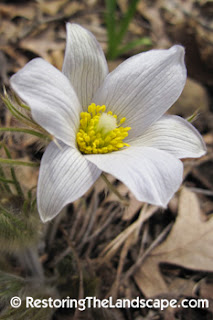 It flowers before the leaves emerge and the stems are covered with tiny white hairs giving the whole plant a fuzzy appearance.

Pasque Flowers are tolerant of dry soils, in open upland sites. The flowers are sought out by early emerging bees. 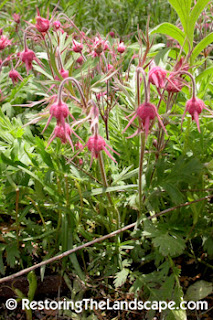 Prairie Smoke ~ Geum triflorum
The Prairie Smoke is flowering right now. The nodding pink flower heads are attractive but not as showy as the plume-like styles in the seed heads that come later. 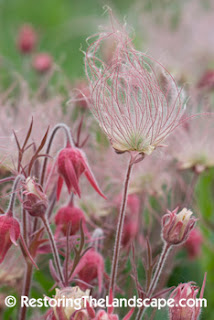 Prairie Smoke is also tolerant of dry soils. It is an excellent native plant in a managed landscape along borders or layered in amongst prairie grasses. It looks especially showy in masses when the 'smoke' seed heads mature.

The foliage is also an attractive feature, deeply lobed and fern-like in appearance.