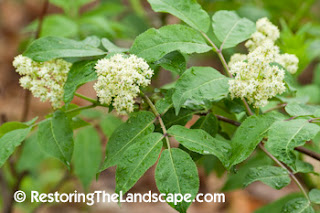 
Red Elderberry is a native shrub of woodlands and woodland openings. It is very common and new shrubs emerge frequently from bird dispersed seeds. 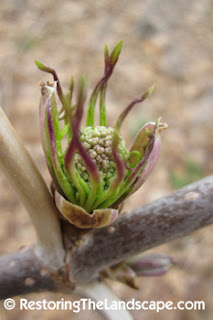 One of the first shrubs to leaf out in the spring, its white conical flowers open as early as the beginning of May.

Red Elderberry has long arching branches that grow quickly (and weakly due to the pithy stems). It often dies back significantly in the winter to resprout from the base. Because of this is does need some extra attention if you want to manage its form in gardens. Otherwise, you can let it grow naturally. It can reach heights of 10 feet or more but more commonly is around 6 feet. 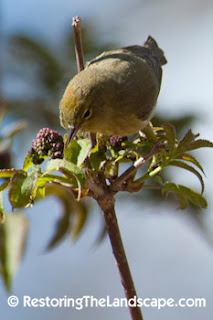 Emerging leaves and flowers are welcomed by early emerging pollinators, other insects and migrating birds. This year we had several Orange Crowned Warblers that worked over the Red Elderberry shrubs over a two week period eating the insects. Read and earlier post about this. 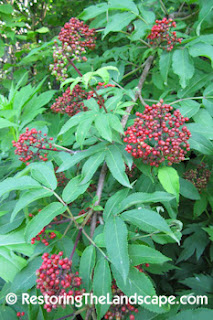 This is a wonderful all around native shrub for wildlife. The red fruit is just maturing now which attracts many bird species including the Gray Catbird, Waxwings, Robins and Flycatchers.

It makes an attractive backdrop to native perennials, or as a featured grouping as a bird friendly thicket. It performs really well in our dry woodland as an understory shrub. It is most often found in upland wooded openings whereas the Canada Elderberry, which flowers later, prefers moister, lower lying locations.