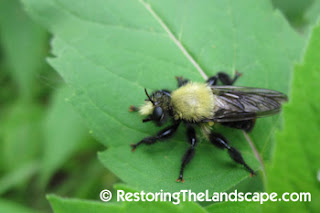 No, that's no bumble bee. It's actually a fly dressed like a bee (bee mimic). This disguise tricks predators into thinking that they're a stinging insect so they're left alone. On the flip side, they are voracious hunters as they predate and ambush their insect prey.

I was excited to spot this Robber Fly (Laphria flavicollis) the other day in the garden. It gave away its true identity when it landed and folded its two wings back behind it. 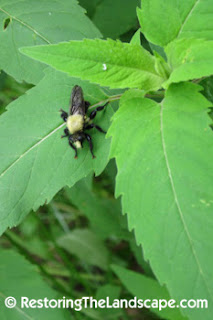 Other differences between these flies and bees include the hairy beards and wide set eyes "to scan for appropriate prey. They generally dart out from their perches to capture other insects, which they usually impale with their snout, forward-facing mouthparts, usually penetrating the victims through the neck or other chinks in the prey's chitinous armor. Robber flies use their mouthparts not only to impale prey, but also to inject a mixture of powerful nerve poisons and enzymes that liquefy the tissues of their victims. (Insects, Their Natural History and Diversity) 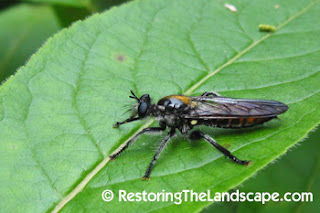 Another Laphria species, Laphria sericea was photographed in the yard last week. These flies are "common sights along woodland paths, where they sit on exposed leaves or twig tips and scan a discrete search area for potential prey." (Insects, Their Natural History and Diversity) This Robber Fly has distinctive orange hairs that cover the abdomen and thorax. 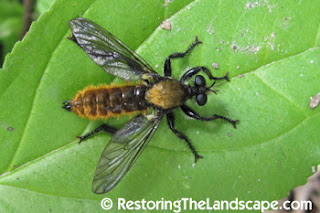 Another photo of Laphria sericea (atkis complex) that I photographed at a local park last year.

"Robber flies are strong flyers, and usually capture prey on the wing. It is not unusual for them to capture insects larger than themselves". (Insects of the North Woods)
Read an earlier post about Bee Mimics
© Heather Holm, 2015. Heather Holm