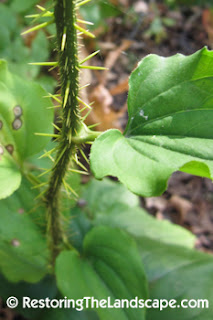 
Bristly Greenbrier is one of several Smilax species in the upper midwest. It's considered a woody vine, although it doesn't seem to develop an aged or woody looking stem. The stem is covered in different sized prickles that are very sharp.

Growing to almost 10 feet high, it tends to grow upwards and arch over other plants. The prickles (along with the tendrils) help it to catch on plants or stems to climb upwards. 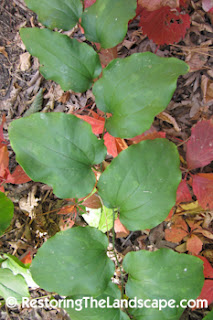 Bristly Greenbrier is found in medium woodlands in part shade as well as lower lying areas that are seasonally wet.

The leaves are a medium green, heart shaped with parallel veins. Flowers clusters emerge from the leaf axil and open in late May to early June. They are smaller and looser clusters than some of the other Smilax species. The blue-black fruit form in fall hanging downwards from the vine. 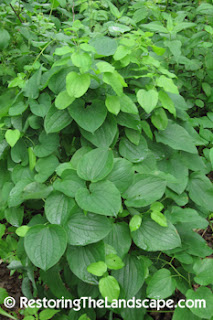 This photo is of the Hairy Carrion Flower Vine ~ Smilax lasioneura. A non-bristly herbaceous vine, it's much easier to manage in the landscape. It grows to about 8 feet tall, but usually found much shorter. A native to woodlands and openings, it's tolerant of dry sandy soils. 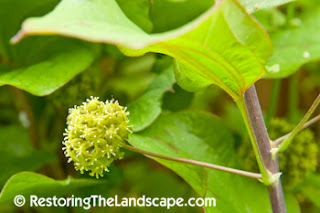 Flowers on the Hairy Carrion Flower emerge from the underside of the leaves, are tightly clustered in a round umbel. The common name Carrion is for the flower fragrance which is quite strong and smells of carrion or dead animals. This vine also flowers in late May to early June.