Discoveries Out and About: American Figwort ~ Scrophularia lanceolata 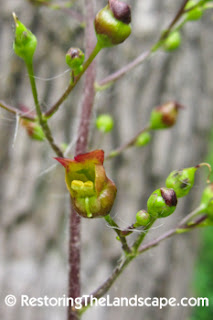 
I came across American Figwort in early June at a local park. Just starting to flower, this 6 foot tall perennial has tiny flowers but its height makes it stand out above other plants.

The few plants I saw at this park were growing at the edge of the woodland in part sun and sandy soil. 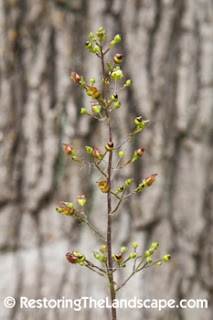 The flowers are really interesting, tubular and 5 parted, with two upper lips that are rusty red to brown. The branched cluster of flowers is tall and linear, about 6-8" high and 3" wide. 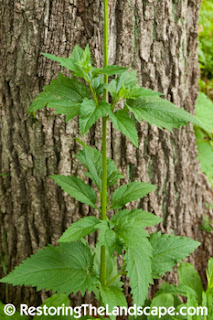 The leaves are arranged opposite on the flower stalk. They are coarsely toothed, and longer than wide.

There is an Eastern Figwort (Scrophularia marilandica) which is less common in the upper midwest. It's even taller reaching heights of 10 feet. The leaf stalks are much longer on the Eastern Figwort compared to the American Figwort. The Eastern Figwort also flowers later in the season in July. (Wildflowers of Wisconsin) 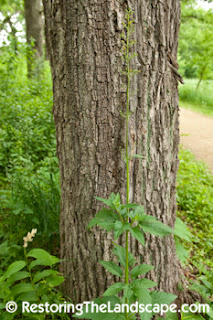 The hard brown seed capsules are maturing right now. If you have an abundance of this native perennial, cold stratify the seeds in the fridge for 60 days, then sow on the soil surface. The seeds need light to germinate. (Prairie Moon Nursery)
© Heather Holm, 2015. Heather Holm