This is part of a series of posts I will be writing this winter on sustainable landscape businesses.
In the upper midwest, our woodland understories have been invaded by the invasive woody shrub or small tree, European Buckthorn (Rhamnus cathartica). Challenged with eradicating this woody invasive, a former City employee, Mary Wright (owner of Cicada Landscape Restoration in Minneapolis) came up with an ingenious solution. Her friend, and also former City employee, Cheryl Culbreth (owner of Landscape Restoration, Inc)  then developed the idea into a product called a Buckthorn Blaster.

The least disruptive method of eliminating woody invasives is to cut and treat with a concentrated (18-20%) herbicide Glyphosate (sold as RoundUp™). Traditionally the herbicide was painted on freshly cut stems with a foam paint brush or spray applicator. Open containers led to spilling and applying too much herbicide, and "spray applicators are susceptible to 'drift' and may damage nearby plants" (Cheryl Culbreth). 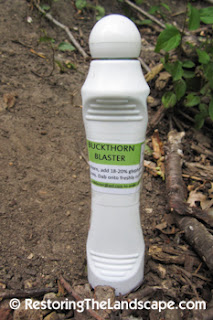 In order to lower human risk, the Buckthorn Blaster was designed with a foam applicator tip which eliminates drift and spillage and reduces the risk to non-target native plants. 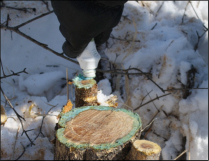 It also uses less herbicide, as the chemical is released with a little pressure on the tip to the targeted cambium or outer edge of a cut stump. 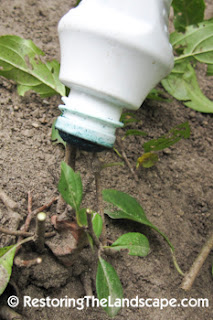 On smaller seedlings, one quick dab is all it takes. 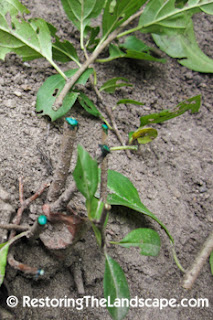 A blue dye (Mark-It Blue) can be added to the Glyphosate to make it easier to identify treated from non-treated cuts.

You can use Buckthorn Blaster on any undesirable woody or herbaceous plant (with stems). Some examples provided by Cheryl include non-native honeysuckles, Canada thistle, motherwort, poison ivy and burdock. It is most effective when applied after the plant has leafed out and above freezing temperatures.

Cheryl sells Buckthorn Blasters on her website, www.buckthornblaster.com as well as on her company website, www.landscape-restoration.com along with the blue dye.