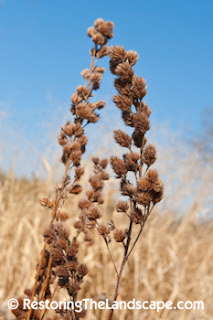 
As winter approaches, plant forms and habits reveal themselves in their dried, browned states. I especially like the taller prairie natives, that are sturdy and stick up through the snow providing interest in the winter landscape. 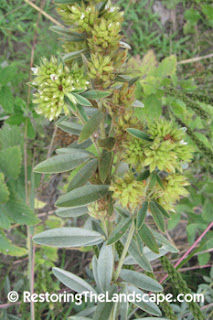 Round Headed Bush Clover has a wonderful winter form, the clusters of dried seed heads turn an chocolate brown on the stiff stems. A prairie native that flowers starting at the beginning of August, the three silver-colored leaves of this legume are one of its most attractive features. The flowers are less noticeable, tiny, white to pink, 5 parted flowers stick out from the tight cluster of the flower head. 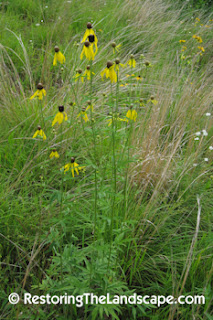 
A favorite of native bees, this tall upright native perennial has showy yellow flowers with petals that hang downwards from the tall center cone. It likes dry, sandy, sunny sites and flowers from early July into August. 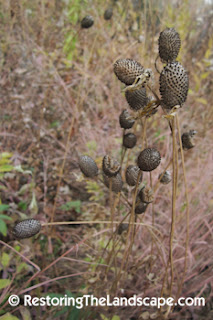 The cylinder like cones brown as the dry and remain on the tops of the stems in late fall. These are great sources of seed for birds during the winter months, juncos and sparrow will pick at the seed heads leaving seedhead debris on the snow. 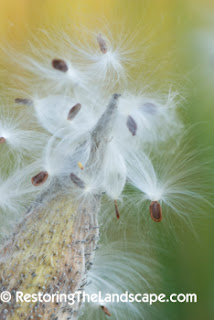 Common Milkweed ~ Asclepias syriaca
The seeds are emerging from the dried pods right now, their white silky hairs are attractive in their own right. 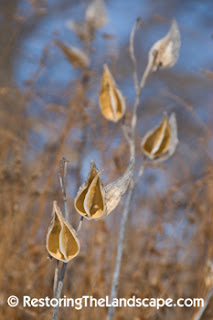 The seeds will disperse with the late fall winds leaving the gray to golden colored dried pods. These stems are sturdy too and can last into the following spring. 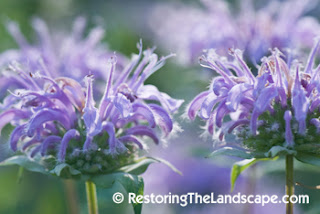 Another tall prairie native, it can reach heights of 4 feet in moister locations or seasons. Another bee favorite (as well as the Hummingbird Clearwing Moth), it flowers from mid July into August. 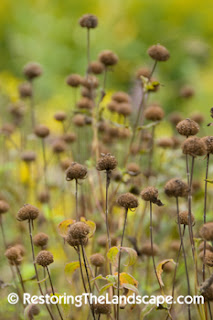 The dried rouned flower heads turn a dark brown in late fall as the leaves drop. In a mass, these seedheads are extremely attractive in the winter landscape.