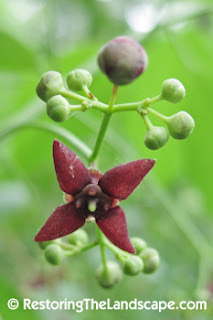 
Eastern Wahoo is an interesting large shrub to small tree sized native. It can reach heights of 20 feet or more, with multiple suckering stems. 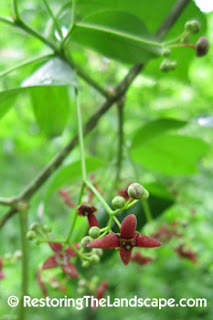 The maroon colored 4 parted flowers emerge in early June in clusters (cymes) that protrude from the branches, often hanging downwards.

The light green elliptical leaves are fairly small, and serrated. The branches are arranged oppositely.

Eastern Wahoo is found in medium soils in lower lying sites, often upland from water, at the edge of woodlands in partial shade, or in more open sites. 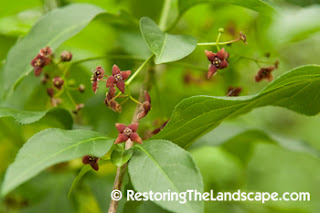 Flowers last into early July and are very delicate in appearance but not overly showy. This plant would be better massed in a landscape rather than used as a specimen because of the suckering habit. Rabbits like to browse on the new suckering shoots so it is recommended that you protect stems. 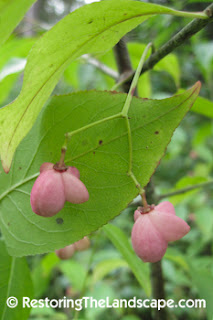 The light pink, 4 capsuled fruit forms by mid September. The capsules open in October revealing a bright red aril inside.

The fruit does not last long on our landscape, I'm assuming it is eaten by birds but have not witnessed this first hand.

Eastern Wahoo is native to eastern North America. See map below for range.