Design and Construction of a Thriving Pond Habitat

One of my blog followers, Mark Funk emailed me in December. In our email conversation I learned about his amazing pond design and construction and wanted to share his project with you.

Here's Mark's story in his own words: 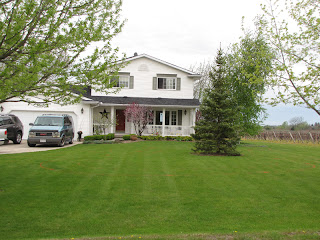 As a university student who had become obsessed with native plants, I was thrilled to hear my parents say that they would like to put a native pond garden in our front yard last year. I had been entertaining the idea of a career in natural landscaping, so our yard became the perfect stage for me to practise and hone my skills. Being my first real venture into natural landscaping, the pond was an experiment and a learning experience.

My parents’ home sits on a vineyard in the Niagara Region in southern Ontario’s Carolinian Zone – known for its natural, but imperiled, diversity. Our goal was to create a beautiful pond that we could enjoy along with others, while contributing to the ecological communities of southern Ontario. I decided that the best way to do this was to mimic the patterns and associations that can be observed in nature. 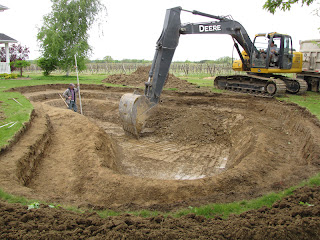 A landscape architect friend of mine, Mattson Meere, designed the pond shape for us, as well as the surrounding garden shape, complete with armour stone retaining wall and berms. The pond is an irregular shape, somewhat triangular, and approximately 10 metres (33 feet) at the widest point and 12 metres (39 feet) at the longest. It is about 1.5 metres (five feet) deep in the middle with a 70-centimetre (28-inch) deep shelf that runs around the perimeter.
After having the pond excavated in spring of 2010, we installed a liner to ensure that the pond would have adequate water levels year-round. Then we added soil on top of the shelf for planting aquatic species. We left the bottom section of the pond without soil to prevent vegetation from growing there. This will help to maintain an area of open water in the centre of the pond where the vegetation won’t encroach. 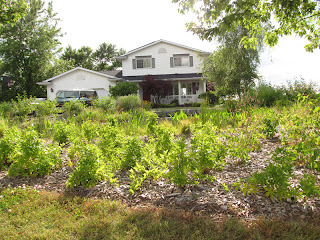 Once the pond was excavated, liner installed, and soil added, it was time to do the planting. My family and I planted over 500 plugs and pots over two hot July days, which tested our dedication, but ultimately proved very rewarding. Despite the fact that we completed the planting just before a two-week hot spell with no rain, most of the plants flourished with only a few good waterings. Of course, the plants that were planted into the water or moist soil around the pond were not as susceptible to drought, but the upland plants around the perimeter didn’t seem to be bothered much either!

The plants that did the worst were the shade-loving species that I shouldn’t have planted into full sun conditions in the first place, such as wild ginger (Asarum canadensis), Jack-in-the-pulpit (Arisaema triphyllum) and bloodroot (Sanguinaria canadensis). Some of these species wilted and appeared to have died within a week of planting, but to my surprise, sprouted again this spring. Adding a heavy layer of ‘forest mulch’ (a combination of shredded wood and bark chips) to the garden helped to suppress weeds and retain soil moisture. 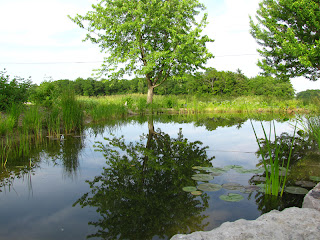 The pond is bordered by a variety of plants from a number of native plant communities. I selected an array of wetland plants for the moist areas, and then a mix of prairie, meadow and forest plants for the surrounding garden, which includes a full spectrum of sun conditions. In total, over 55 species of plants native to southern Ontario were planted.

One of my goals for the project was to make the pond garden a landscape feature that could interact with, and improve, the integrity of local plant communities. For this reason, I planted many of the species that can be found growing in the small fragment of forest and swamp across the road from our house. After we planted the pond, I found it rewarding to discover local populations of the species I had planted, such as blue vervain (Verbena hastata), blue flag iris (Iris versicolor), swamp milkweed and alternate-leaved dogwood (Cornus alternifolia), all within a couple of kilometres of our pond! 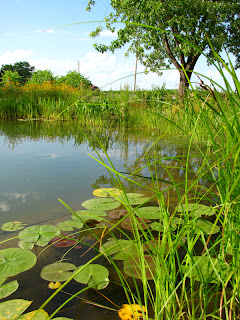 Although the project’s total cost was about $5,000 (CDN), the Niagara Peninsula Conservation Authority (NPCA) funded $1,500 through their Water Quality/Habitat Improvement Project, covering 75% of the plant material costs. The NPCA provides grant assistance for a variety of rural and urban stewardship activities taken on by landowners. We could have cut costs by not using a rubber liner, which cost $1,500, and by reducing the amount of mulch we applied. We’re happy with the design and materials we used, but there is no reason a native plant garden cannot be created for far cheaper. Had we used traditional pond landscaping methods, such as exotic plants typical of the horticultural industry or an ornamental fountain, there’s no doubt in my mind the price tag on the project would have been significantly higher. 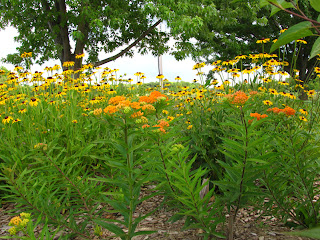 The wildlife that has already appeared in our ecologically isolated yard is incredible! American toads, green frogs and leopard frogs all arrived within a month of the pond’s installation, and in significant numbers too! Along with the frogs and toads came boatmen, water-striders, dragonflies, butterflies, increased bird activity and a great blue heron sighting at the pond’s edge. 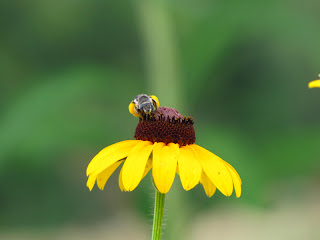 In Year Two we welcomed the addition of a painted turtle, which had wandered onto our yard, and two largemouth bass, which I brought in from a friend’s nearby pond. In addition to the new fauna on our property, species of flora that were not planted by us have found their way into our mini-ecosystem, such as nodding bur marigold (Bidens cernua) and cattails (Typha sp.). This tells me that our yard is already interacting with the local environment as seed dispersal and exchange occurs.

High nutrient levels in the topsoil we added into the pond during construction resulted in an algal bloom at the end of the pond’s first summer. Manual removal of the algae with a pool skimmer seemed the best way to control it. I’ve been told that a pond often needs two to three years for its water chemistry to balance. Shading from aquatic plants can also help control algae by lowering the water temperature. The algae have not been an issue so far in the second year. 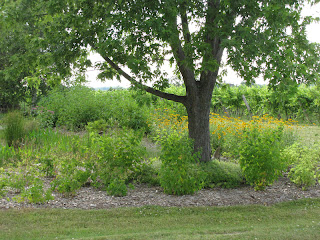 The plants are flourishing, filling bare ground as individuals grow bigger and seeds spread. We’ve added logs to the woodland section of the garden by salvaging pieces of fallen trees nearby and we continue to record wildlife species that come to visit.

In addition to the aesthetic and ecological value we derive from the pond, we have also used it for swimming in the summer (despite having a backyard pool) and ice hockey in the winter, making it a multi-season recreational opportunity. 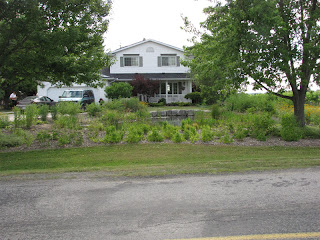 By putting it in the front yard we are voluntarily enduring the scrutiny of every passer-by. It’s rare that we see a car drive by without the driver doing a double take! I enjoy the social and environmental statement the pond makes. It says that we are willing to step outside of societal norms to improve habitat and biodiversity on our property. Many people have taken notice of that, and we have received lots of positive feedback and interest. But ultimately, the reward is seeing the beauty and functionality of the pond as its plants put on their stunning displays and the fauna begin to return to our yard.