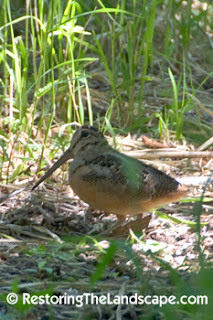 
The male American Woodcocks have been busy lately at the local park putting on aerial displays at dusk to attract the ladies. 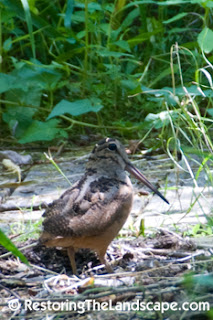 American Woodcocks migrate north in the spring from their overwintering grounds along the gulf coast. Their summer range extends from Missouri eastwards to Maryland and north into central Canada.


Males become active at dusk finding an open grassy area to sound a nasal 'beent' call. They call for several minutes, staying quite still.
They then take off almost horizontally climbing upwards high into the night's sky. Once they reach their desired altitude they start flying around in circles.


"The movement of air over the narrow outer primaries produces a high twitter. It begins with steady twittering as the bird rises, becoming well-spaced bursts of twittering while bird circles at top of climb. Finally, as the bird plunges toward the ground with sharp changes in direction, a series of louder and more varied chirps results." (Sibley Guide to Birds)

* Be sure to turn up the volume on this video *

The Woodcocks we watched would spiral downwards and land within feet of where they had taken off, again starting their 'beent' calls. The males continue their displays trying to attract females for mating.