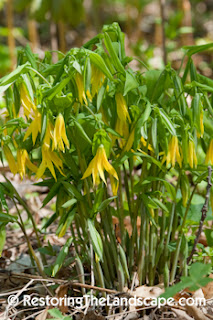 
The Large Flowered Bellwort is one of my favorite spring flowering natives. Bright yellow flowers twist and dangle downwards from 12" high stems.

The insects like this perennial woodland native too, it's offering a nectar reward unlike the Bloodroot and Rue Anemone flowering around the same time. 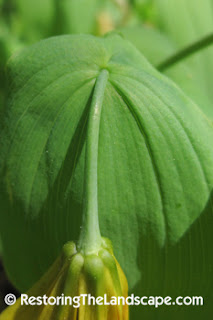 One interesting feature about this plant is that the stem looks as though it pierces through the leaf like an earring because the base of the leaf surrounds the stem.

Large Flowered Bellwort is found in mesic to dry woodlands. Deer do like to browse on the foliage so if you have an abundance of deer prepare to be disappointed one day when you discover this native has been browsed over night. 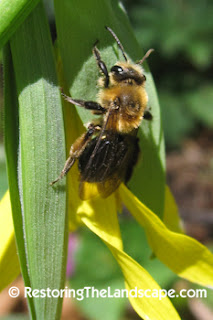 A large Mining Bee (Andrena subgenus Melandrena) resembling a bumble bee was a common visitor to the Bellwort flowers. Their hairy bodies help keep them warm in cooler spring temperatures. 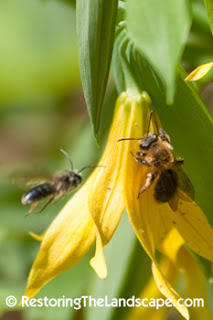 Several smaller Andrena bees were flying around the flowers too, but most did not stop by for nectar as the flowers were being blown around by the wind. 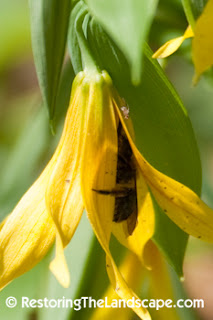 A tiny red-eyed vinegar fly was curious about what the large Mining Bee was up to (look for the fly at the top of the opening). These flies will seek out nectar in the spring before their more favored meal of rotting fruit is available. 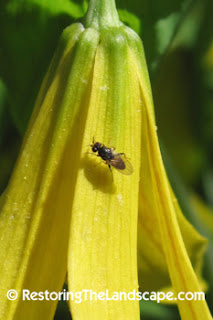 And a slightly larger fly species was looking for a way up into the flower to feed on some nectar. 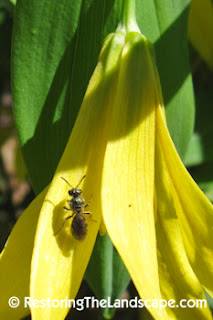 Tiny Sweat bees (Lasioglossum species) were also abundant. More than one would emerge from the same flower.

A triangular shaped, three parted seed capsule will develop later in the summer. The seeds are dispersed by ants who are attracted to the protein-rich fleshy elaiosome that is attached to each seed.
© Heather Holm, 2015. Heather Holm