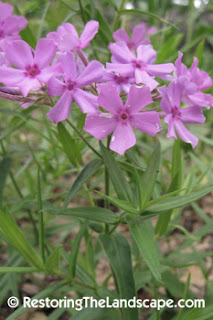 
Prairie Phlox has performed extremely well on our sunny, sandy hillside. A native phlox of taller stature than the commonly grown introduced creeping phlox, the flowers are equally as showy.

In our drier soils, it reaches about 12" in height, with a loamier location it can grow twice as tall. The linear, oppositely arranged leaves are very attractive and set off the bright pink to purplish 5 parted tubular flowers. 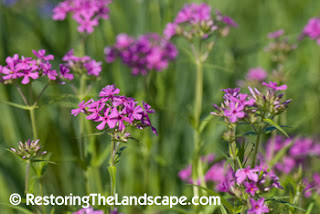 It's not the most popular plant for pollinators in the yard, as the Wild Lupine, Golden Alexander and Virginia Waterleaf are also flowering right now. 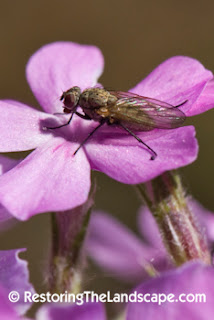 I have seen a few hummingbird moths visit the flower, bumble bees will investigate the flowers but move on without attempting to seek out a nectar reward in the tubular flowers.

I captured this muscid fly resting on the flowers but I'm not sure if it was seeking out any nectar that other insect visitors left behind.

I suspect other pollinators include butterflies and moths who can easily reach down the long tubes with their long proboscises. 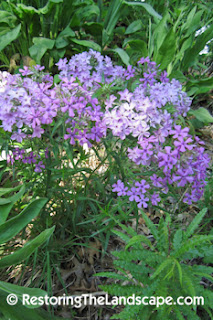 Seeds form in hard light brown capsules which burst open dispersing the seed a good distance. If you want to collect the seed, make sure you monitor the capsules as they mature to catch them before splitting open.