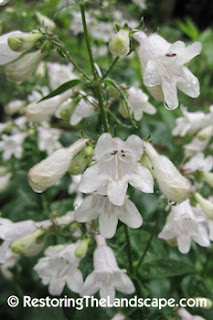 
Beard Tongue is one of the showier native Penstemon with large white flowers arranged in a large cluster. An easy to grow native perennial, it is very adaptable to sandy soils as well and more loamy locations. 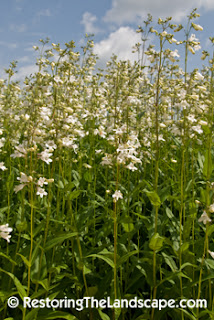 It can range from 18" to 48" in height. With an upright, sturdy habit that works well in both traditional perennial borders or naturalized plantings.

The basal leaves have short stalks, but the opposite leaves on the flower stem do not which gives Beard Tongue a nice form and highlights the large flower clusters. 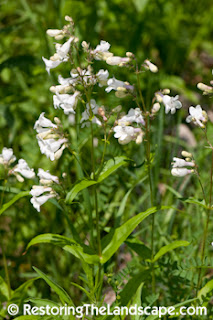 The white flowers, sometimes with purple stripes, are 5 parted and tubular. The opening on this Penstemon is quite large so both bumble bees and tiny sweat bees can get their bodies inside. The flower has a flat base which makes a nice landing pad for pollinators.

Penstemon is derived from thee Greek word pente = 5, and stemon = stamen, meaning 5 stamens. Only 4 of the 5 stamens are fertile. (Wildflowers of Wisconsin) 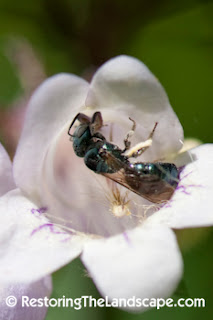 When the flowers open, the anthers develop first. The anthers brush against the thorax or upper backs of bees as they visit the flowers. This action releases the pollen.

The style develops later and in doing so lowers its stigma downwards to prevent bees from entering the flower.

This tiny sweat bee is a regular visitor to the Beard Tongue flowers. 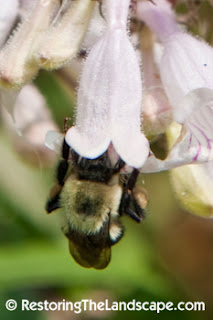 Bumble Bees also visit the flowers. Their larger bodies appear to get stuck in the flower tube as the use their long tongues to reach the nectar. 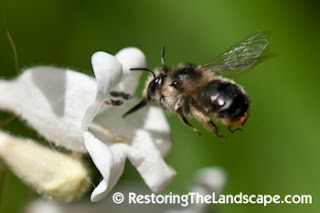 Leaf cutting bees also like the Beard Tongue flowers. They collect pollen on their abdomens.

Beard Tongue thrives in full or partial sun and mesic, loamy soils. It does reseed around the parent plant.

Beard Tongue is native to eastern North America. Some references indicate that it has possibly naturalized and not originally native to the upper midwest states such as Wisconsin and Minnesota.