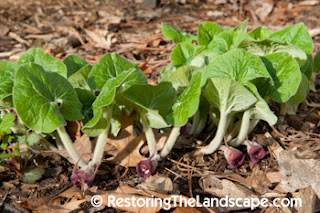 
The Wild Ginger was in full bloom in early April this year. The three red sepals form a triangular shaped flower with a white interior. The flowers are hidden below the leaves and often rest on the ground. 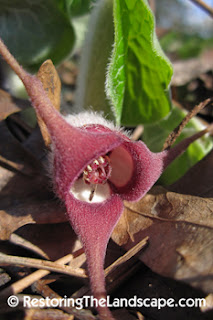 "The flower evolved to attract small pollinating flies that emerge from the ground early in the spring looking for a thawing carcass of an animal that did not survive the winter. By lying next to the ground flower is readily found by the emerging flies. The color of the flower is similar to that of decomposing flesh. Whether these flies pollinate the flower or not is in some dispute. Never the less they do enter the flower to escape the cold winds of early spring and to feast upon the flowers pollen. Some of the pollen attaches to their bodies and is taken with them when they visit the next flower."  (US Forest Service, Celebrating Wildflowers) 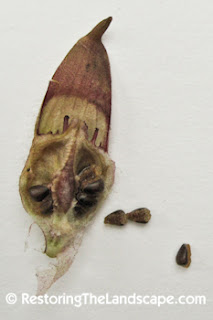 The method of seed dispersal  is known however. Along with other spring ephemerals such as Bloodroot, the seeds have a fleshy appendage attached to them called an elaiosome. The purpose of the protein rich elaiosome is to attract ants. 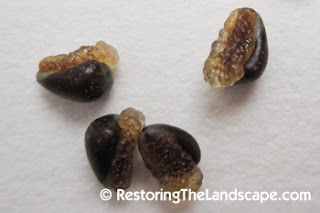 Ants love to consume the elaiosome, and discard the seed. They often take the seed back to their nests where the seed is discarded in their nest, ready to germinate the following season. 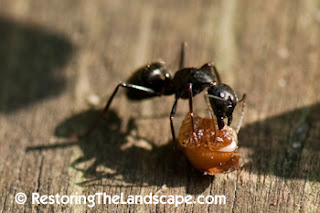 I thought I'd see how much ants liked the elaiosome. I collected a few seeds and placed them on the ground near an ant. The ant was immediately drawn to the seed and elaiosome. 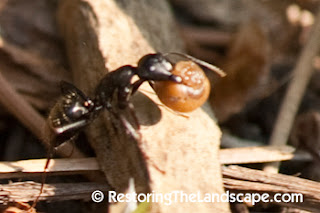 It consumed the whole elaiosome from one seed, then carried the other one off probably to its nest.

What a great method of seed dispersal, get the seed as far away as possible from the parent plant, and, away from predators such as rodents.
© Heather Holm, 2015. Heather Holm