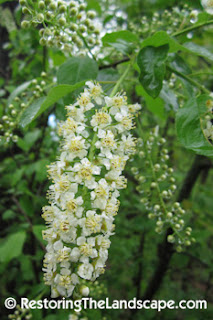 
The Chokecherries are flowering in Minnesota right now, and it's hard to miss their long tubular-shaped clusters (racemes) of white flowers.

Chokecherries fall between a large shrub and small tree in size. Large ones can get about 25 feet in height but more commonly you will see them range from 8-15 feet. 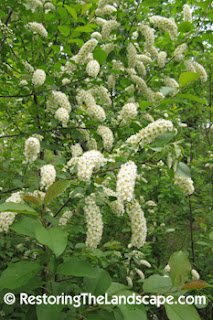 We have both single stemmed and multi-stemmed Chokecherries in our yard occuring naturally. Both forms are common.

Chokecherry is an important native shrub/tree for wildlife. The early blooming flowers are sought out by many pollinators including flies and bees. The dark blue/black fruit (drupe) matures in early September and is sought out by many birds. 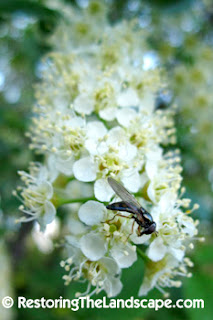 Chokecherries also make good habitat as they commonly grow along the edges of woodlands providing cover for birds and small mammals. Chokecherry will also grow in the shade of mature trees such as oaks that are more sparsely spaced than a maple deciduous woodland.

Chokecherries can turn a number of brilliant colors in the fall from bright yellow to orange to red. Locally, in oak woodlands where buckthorn eradication techniques have been employed, Chokecherries are one of the first native woody species to reemerge after the Buckthorn has been eradicated. 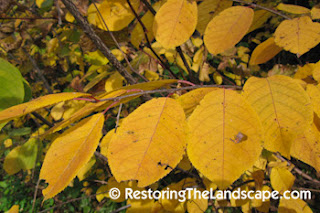 It is commonly mistaken for both the invasive European Buckthorn and Glossy Buckthorn. Read an earlier post on this with comparison photos of the bark, leaves, buds, flowers and fruit.